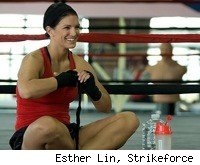 Little has been heard from Gina Carano since her loss to Cris Cyborg in August, and Strikeforce CEO Scott Coker doesn't expect to see her back in action before mid-2010.

Coker said on this week's edition of The MMA Hour that Carano, who is set to begin filming the new Steven Soderbergh movie, Knockout, in early 2010, isn't in Strikeforce's immediate plans.

"It's pretty clear that we won't see her until second quarter of next year, and probably late second quarter," Coker said. "Probably towards the summertime. That's when we're expecting her back."

Despite the fact that she doesn't have any fights lined up, Carano's star continues to shine bright, as she was recently featured in ESPN The Magazine's highly publicized "Body Issue."

But while she, and many other professional athletes, including Randy Couture, showed off some skin in the magazine, Carano recently told Newsday's Neil Best that she won't be bearing it all any time soon.

"It was all good. But I'm just a shy person, so it's a little bit hard. It was beautiful, but I'm shy. No more. I'm going to keep my clothes on for a while, I think."


Whenever she returns to action, Carano figures to still be in the title mix in Strikeforce's 145-pound women's division, which has improved a lot since she last fought with the recent additions of Marloes Coenen, Erin Toughill and Roxanne Modafferi.