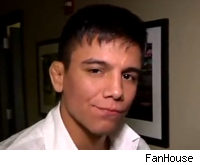 Miguel Torres has been a busy man as of late even though he doesn't have a fight coming up. The former WEC bantamweight champion recently filmed a movie with the likes of Kimbo Slice and Roger Huerta and just returned from training with boxer Miguel Cotto in Florida. Torres was offered a fight on WEC's upcoming Dec. 19 show, but didn't feel as though he had enough time to prepare.

FanHouse spoke to the 28-year-old about when he expects to return to action, what went wrong against Brian Bowles in August, and the evolution of his famous mullet. Check out the video interview below.

Shot and edited for FanHouse by E. Casey Leydon.