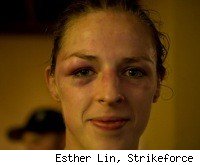 The Sarah Kaufman vs. Takayo Hashi fight, which was originally scheduled for the Nov. 20 Strikeforce Challengers show, will now take place in mid-January 2010.

The undefeated Kaufman (10-0) informed FanHouse on Thursday that the organization told her that the highly anticipated 135-pound fight will happen on a yet-to-be announced show early next year.

Kaufman also said that she wasn't given a specific reason as to why the bout was postponed. She didn't suffer any kind of injury and she was unaware of Hashi being injured.

MMA Junkie first reported that the bout was off the Nov. 20 show last week.

Strikeforce has yet to officially announce its plans to crown a 135-pound women's champion, but CEO Scott Coker has recently said that the organization will hold a tournament in the near future. And while many believed Kaufman vs. Hashi could qualify for a title fight, Kaufman said Strikeforce has yet to talk to her about that.

The undefeated Kaufman is 2-0 in her Strikeforce career, already defeating Miesha Tate and Shayna Baszler earlier this year.

Hashi avenged the only loss on her resume in 2007 -- a 2005 submission to current Strikeforce fighter Hitomi Akano -- when she defeated Akano via unanimous decision in 2007. She also holds a notable victory over top contender Amanda Buckner.