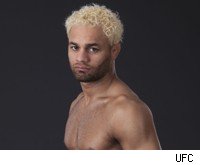 Josh Koscheck and Anthony Johnson have agreed to step in on short notice to fight each other at UFC 106, beefing up a card that became one of the UFC's weakest recent pay-per-view shows when Brock Lesnar pulled out with an illness.

Koscheck wrote on Twitter Tuesday night that he had agreed fight in the co-main event at UFC 106. Sherdog later reported that Johnson would be his opponent.

Johnson vs. Koscheck isn't a great co-main event, but it's a decent fight. Johnson is one of the up-and-coming stars of the welterweight division, and Koscheck will be his most accomplished opponent to date. For a bout taken on less than a month's notice (UFC 106 is on November 21), it's a good fight.

Koscheck has never had a problem with taking fights on short notice: He actually took his fight with Thiago Alves at UFC 90 on even shorter notice when Diego Sanchez pulled out. And for Johnson, who came in a ridiculous six pounds overweight when he fought at UFC 104 on Saturday, fighting again four weeks later might be a good thing: It won't allow him to balloon up between fights like he has in the past.

UFC 106 is headlined by a main event of Tito Ortiz vs. Forrest Griffin.