Defending The Champ: Sickness, Not Scandal, Behind Lesnar Postponement 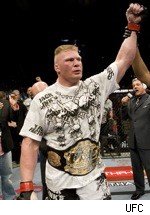 Brock Lesnar says he has the flu, and has been too ill to train effectively and prepare for the biggest challenger of his title reign: 6-foot-2, 260-pound Shane Carwin. Because of an extended illness, he's pulled out of their scheduled UFC 106 fight, leading to a postponement that will probably place the bout in the early part of the new year.

That seems perfectly rational and logical. But apparently it's not enough for some, all because of a video of Lesnar appearing at an Oct. 18 Minnesota Vikings game. The cynics believe that video is proof positive that Lesnar is healthy and that something else is afoot in regards to the date change.

What is with the MMA world lately that makes them want to turn every story into a soap opera?

Simply put, there is no evidence to point to something sinister. None. Lesnar has always been a perfectly game fighter. This is a man, after all, who entered the UFC after one pro fight, telling a skeptical Dana White, "Either I can do it, or I can't. Let's find out." So any theory that he's scared of Carwin is ridiculous. I'm sure he respects the undefeated Coloradan, but fear is not really in his system as it pertains to fighting.

To be blunt, the other theory put forward by conspiracy theorists is steroids. They think that perhaps Lesnar mistimed a cycle and was forced to back out now before he has to submit to a drug test.

Here's why that theory is garbage: Nevada has random drug testing. They could have tested him a week ago or a month ago, at any time during his camp, really. He didn't just need to be clean on the day of his fight; he needed to be clean the whole camp, so it doesn't make sense that he would suddenly withdraw from the fight now to avoid detection. And by the way, since the proposed reschedule date is in Nevada, the NSAC could test him tomorrow if they wanted, so postponing the fight would not necessarily spare him a drug test.

Maybe -- and I know this sounds crazy -- it's just as simple as him actually being sick. Just because he showed up to a football game doesn't make him a liar. People go to work sick all the time, but there's a difference between sitting at a desk with a flu and trying to prepare for a mixed martial arts championship match with one.

He showed up at a game in his home state and blew a horn. Isn't that completely different than going to two or three training sessions a day and taking yourself to the physical limit each time? What does one have to do with the other? What if someone saw him at the grocery store? Is that a sign that he's healthy? What about if they saw him taking his daughter to school? Would that be acceptable? Because people still live life when they get sick, but that doesn't mean they can whip themselves into peak physical shape to defend a title.

Carwin in a recent blog post said that he'd contracted a strain of the swine flu during his training camp, but that he'd chosen to soldier on and prepare as best he could for the originally scheduled Nov. 21 date.

As we know, however, these sicknesses affect everyone differently. Some people who contract the flu feel better in just a few days, but some people don't. Some people die from it; over 30,000 in the U.S. alone in most years, according to the Center for Disease Control. So if Lesnar says he cannot work out and prepare properly, I believe him. He's never backed down from any challenge before.

Earlier this month, Yahoo! Sports writer Dan Wetzel visited Lesnar at his Alexandria, Minn., training camp, and said that during that time, Lesnar mentioned being excessively tired and lacking energy. A few days ago, Lesnar's training partner Chris Tuscherer told The Las Vegas Sun that Lesnar had suffered flu-like symptoms for 25 days and skipped a whole week of practice in hopes of recovering. But for some reason, people find it easy to ignore that evidence and fun to explore other scandalous possibilities.

No one wants to see a fighter lose because he came in weak due to illness -- especially in a championship fight. And in the end, we will have two fighters who are as close to their physical peaks as time will allow.

Then, can we put the soap opera behind us and get back to fighting?