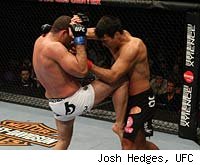 For the first time since his loss to Forrest Griffin more than two years ago, Shogun Rua can legitimately be called one of the top 10 fighters in MMA -- and it took a loss to get him there.

Rua's unanimous decision loss to Lyoto Machida in the main event at UFC 104 was a fight that most people thought he deserved to win, and a fight that makes one thing very clear: Shogun is back.

But where does Shogun fit in our list of the Top 10 pound-for-pound fighters in MMA? Find out below.

1. Fedor Emelianenko: The best fighter in the sport's history will reach his largest American audience yet when he fights Brett Rogers on CBS on Nov. 7.

2. Anderson Silva: The UFC middleweight champion is expected to defend his title against Vitor Belfort in early 2010.

3. Georges St. Pierre: The UFC welterweight champion will be back in early-to-mid 2010, likely against the winner of the UFC 105 fight between Mike Swick and Dan Hardy.

4. B.J. Penn: The UFC lightweight champion will defend his title against Diego Sanchez at UFC 107.

5. Lyoto Machida: He'll give Shogun an immediate rematch in early 2010.

7. Brian Bowles: The WEC bantamweight champion is expected to take on Dominick Cruz some time in early 2010.

8. Shogun Rua: People forget how young Shogun is: When he won the Pride Middleweight Grand Prix in 2005 -- an accomplishment that made him, in the eyes of some MMA observers, the best fighter in the world -- he was just 23 years old. When he lost to Griffin in 2007 and sat out all of 2008, he wasn't past his prime, he was just injured. Now that he's healthy, Shogun has shown by knocking out Chuck Liddell and by going toe-to-toe for 25 minutes with Machida that he's one of the sport's elite fighters.

9. Rashad Evans: After Rampage Jackson pulled out of what would have been a big-money fight at UFC 107, Evans will have to satisfy himself with facing Thiago Silva at UFC 108.

10. Miguel Torres: For Torres, 2010 will be all about earning a rematch with Bowles.