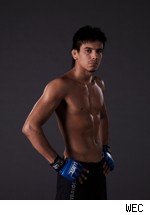 Torres was a special guest last week at the Fight Factory in Tampa, Fla., the site of Cotto's training camp for his Nov. 14 fight against Filipino superstar Manny Pacquiao.

"I'm picking up a lot of details, a lot of little things he does different than what I would in one of my training camps," Torres told FanHouse. "And I got to see how a professional boxer at the top of his game conducts his training camp and how his trainers cater to his needs and make him a better fighter."

One of the first things Torres noticed was how structured Cotto's regimen is. Different coaches each watch Cotto's footwork, defense and punching power. In addition to a strength and conditioning coach that keeps Cotto in world-class form, the champion boxer achieves an optimized diet through a personal chef that prepares his meals.

More importantly for Torres, who carries a never-say-die attitude, is to train his body more intelligently.

"I set up my own camps and when I go out and train, I basically beat myself down every day to make myself a tougher and better fighter," Torres said. "And Cotto's camp it's totally different. They train him just enough. They push him to a level where he's getting pushed and when he gets there, they let him rest and make sure he eats well and make sure he's working out right.

"They make sure he has scheduled workouts at the right times and when I did my own camps I was just try to push myself to the limit every time, and I've learned you can't do that, cause that breaks your body down and you never recover."

The two popular Hispanic fighters met through their sponsor Ecko Unlimited, who proposed the idea to Torres following his title loss to Brian Bowles at WEC 42 in August.

"There is some value in boxers hanging out with MMA fighters and training together," said Eric Samson, Director of combat sports marketing for Ecko Unlimited. "Both guys have a very tough mentality, a very tough attitude and both guys are pretty high level athletes in their respective sports. So the idea [came] of putting them together and seeing if they can train well together and if they can learn from each other and support each other."

Torres laced up his boxing shoes and spent the week at the Fight Factory hitting pads with Cotto's head trainer Joe Santiago, exercising with strength and conditioning coach Phil Landman and jumping in the ring with Cotto's sparring partners. Unfortunately though, Torres has not been clocking in actual sparring sessions with Cotto, who is only mixing it up with southpaws for his preparations against Pacquiao.

Torres is hoping that they'll work more closely next time around if Cotto is available to join him for his next WEC training camp.

"That's one of the things I would love to do," Torres said. "Either me go to Puerto Rico and train with him a couple of weeks or him come down here. We'll be able to hook up for sure because the relationship we've developed is very strong."

Torres believes he and Cotto share similar mentalities in that nothing in the ring or cage will surprise them when they are in peak shape and properly prepared.

"That's going to make his mentality a lot stronger, because he knows he's done everything the right way," said Torres, who will be in attendance at the MGM Grand in Las Vegas on Nov. 14 in support of Cotto.

As for Torres' next fight, the WEC wanted him for the WEC 45 card in December, but Torres' schedule would prevent him from participating in a full training camp. He has informed the WEC that he'll be available to fight at the earliest in January.

"After my last loss, I want to come with a smarter approach to my game, and that's what I'm learning from Miguel Cotto," Torres said.