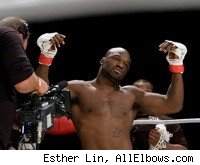 Strikeforce is gearing up for a busy November, but the organization already has plans in place for their year-end show as well. Strikeforce CEO Scott Coker said on this week's edition of The MMA Hour (which will be featured later this week on MMA FanHouse) that the organization's next big Showtime event will take place on Dec. 19 from the HP Pavilion in San Jose, Calif.

Coker also mentioned that recent Strikeforce signee, "King" Muhammed Lawal, is scheduled to make his debut on the show, but no opponent has been signed just yet.

Also proposed for the event, according to Coker, is a middleweight match-up between another two Strikeforce rookies: Matt Lindland and Ronaldo "Jacare" Souza. Coker said that bout has yet to be made official, though.

FanHouse recently reported that Scott Smith and Robbie Lawler are also scheduled to fight in separate bouts on the Dec. 19 show.

The organization has three shows scheduled for November, including back-to-back events on Nov. 6 and 7.