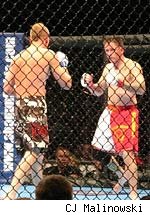 "This crowd is unbelievable. I would dream to be on a card like this. I wish that I had this sort of crowd for my first fight," said MMA legend Renzo Gracie, who was joined in the crowd by Rickey Henderson, Lenny Moore and others. "This is the best crowd and event I've ever seen."

Check out the results and recaps below.

145 pounds: Binky Jones unanimous decision over Jason McLean
The crowd roared for its 39-year-old native son, who boxed, threw kicks and knee shots all effectively from a distance against his shorter foe in the main event.

After being taken down, Jones reversed McLean and began to ground and pound. Jones, however, was reversed in the later part of the round, but McLean was not as effective.

In the second round, Jones attempted a guillotine from a standing position. Later, McLean was penalized for kicking from his back. On their feet, Jones moved in behind his jab, and picked his shots until being taken down. McLean spent much of the round on top, but landed few clean strikes.

On their feet in the third round, Jones, yet again, dictated the pace from a distance, switching from the right-handed to the southpaw stance. A lateral drop landed Jones on top, a position from which he nailed McLean with elbows. Jones later escaped McLean's submission attempt and controlled the action until the end.

"I wrestled in high school and college, but it's not like football, baseball and basketball. That's it after college, and I didn't have nothing," said Jones.

"Now, the UFC is here, and here I am about to turn 40 next month," said Jones. "Thank the lord my body is still healthy enough to do this -- a pro, MMA fighter at Baltimore's first MMA show. It's amazing."

The first round was a brutal one in favor of Kelso, who scored a takedown and sat back on a number of submission attempts, including a rear-naked choke hold. Kelso's striking caused bleeding from below Mackin's hairline above his forehead that dripped down his face and chest.

"Match started, I wanted to stand with him," said Mackin, a former Maryland state wrestling champion. "I went back to my instincts and wrestled a little bit. He took me down and beat the hell out of me and bloodied me up pretty good,"

In the second round, Mackin drilled a straight left while standing, and, later, gained the top position and began to pound his rival with fist and elbow strikes to the ribs, face, and head.

"Second round, I knocked him around pretty good, caught him right on the jaw, and he sort of smiled about it," said Mackin. "But I could tell that I got him good and he was a little gassed, because he took this on short notice."

As Mackin's conditioning took over, the keylock was available, and Mackin snagged Kelso's left arm and forced the tap-out.

"I forced him into a bad shot, which was the gameplan, worked him into a good position, and he had to work really hard for the takedown," said Mackin. "So that gassed him out pretty good. I was able to lock up the Americana and submit him."

"My parents actually decided to buy tickets at the last moment, but I'm sure they're never going to watch again after this," said Mackin. "I loved the crowd. All of my friends and my family got to come see it also."

185 pounds: Dave Daniecki submits Wade Drake, 2:25, first round (D'arce choke hold)
Nancy Daniecki had "seen MMA on TV, but only for a few seconds," adding, "that's about all that I can watch." Ted Daniecki was "a little nervous, it being my own son."

But Dave Daniecki's parents had nothing to worry about.

Trapped against the cage's fence, Drake took a knee to the side, followed by an elbow to the face. Drake eluded a keylock, as well as a north-south choke, but a D'arce choke forced Drake to tap out.

"Dave really controlled the pace, got two takedowns, was working some ground-and-pound," said matchmaker Bryan Hamper. "He transitioned well from the north-south choke to a D'arce to finish the fight."

"I wanted to stand up and bang, knock the guy out. But I'm a wrestler, so my instincts kicked in. I'm real good at scrambling, defending or whatever. I'm comfortable with the fight and happy it didn't go past the first round," said Daniecki, who was photographed with the Ravens' Ray Rice in the cage.

"I didn't really pressure [his parents], I just talked about it, and they know that I love MMA," said Daniecki. "They know that I'm there in the gym five, six days a week. I think they just felt guilty."

165 pounds: Mike Paschal TKO over Scottie Ayers, 0:40, second round
Paschal and Ayers locked up, but then, the latter broke the clinch and tumbled backward, covering up in fetal position as Paschal fired away and forced the stoppage.

"My left knee just buckled," said Ayers. "We're going to go back to Houston and get it checked, get some MRI's and find out what happened. I think it's my ACL."

Paschal was surprised, but, nevertheless, happy, having transitioned to the cage from the boxing ring, where he is 19-2-1 with four KOs as a professional.

"His nose was cut. He tried to shoot, and I knew that was what he would try to do. I kind of threw him off. I watched him fall, banged him a couple of times, tried a couple of elbows. It looked like his eyes went up in his head," said Paschal.

"There's a lot more training involved than in boxing. I want to sit down with John Rallo to see if I'm going to do this again," said Paschal. "It's time-consuming because of the hours, but I'm thinking about it. I'm probably going to have to do this again."

155 pounds: Jacob Kirwan submits Brad Pole, 1:05, first round (Guillotine choke)
Kirwan countered a submission attempt for a double-leg takedown, stood up, and created distance on their feet. Then Kirwan scored another takedown, slipped behind Pole, and wrapped an arm around his rival's neck.

After sitting back into a guillotine choke, Kirwan forced the tap-out.

"I've finished four fights with that thing, man. It's become sort of my go-to move," said Kirwan, who dedicated the win to his younger brother, Noah, on his birthday.

"I have probably 60 or 70 people supporting me in my fights," said Kirwan. "They come from all over to see me. It gives me a feeling that you just wouldn't believe. Best crowd I've ever fought in."
185 pounds: Joey Kirwan submits Dan Root, 1:30, first round (Rear-naked choke)
Joey didn't quite finish his rival as fast as his brother, Jacob, but he did make him quit.

And afterward, Joey leapt to his feet, threw a fist skyward, and gave the throat-slashing gesture to the screaming crowd.

"I went out there, and he took me down. I knew that he was good on top, but I rolled for a leg lock, just for the position, but I ended up in a side mount," said Kirwan. "I got on top and hit him with an elbow and took him back. It worked out well."
155 pounds: Carey Vanier TKO Paul Mann, 2:09, second round (strikes)
Both fighters scored takedowns during a tremendously competitive first round. But Vanier finished strong and on top, before stepping up the pressure in the second round.

Vanier nailed Mann to the body, and, after a takedown, finished him with about eight consecutive strikes.

"In the second round, Carey caught him with some really good knees from the clinch, and you could tell that [Mann] started to feel the body shots," said matchmaker, Bryan Hamper. "Carey had two good slams. And then, he just finished it with strikes in the second round. He looked really sharp."

"I think he kind of got tired, and striking, that's usually how my fights end," said Vanier. "I landed at least eight times, and a couple of them landed and I was thinking to myself, 'Wow, why is he still up?'"
205 pounds: Cody Donovan TKO over Joe Stripling, 1:16, second round

Donovan dominated the matchup, finally knocking the wind out of Stripling with a deep, shot of his left knee to Stripling's right ribs and liver.

"Joe was very aggressive, and I let his style affect my style. But I hit him with the right knee first, and I could tell that he didn't like it," said Donovan. "So I raised his right shoulder up real high and it kind of opened him up, and I just slammed that left knee home into the liver. I cut his sails down and he was done."

Donovan ran his record to 5-0 and looks to be "about two fights away from the UFC," said Hamper. "He's just a top prospect right now."
135 pounds: Pennsylvania's Jim Hettes submits Steven Baker, 1:35, first round (armbar)
The fight went quickly in the favor of Hettes, whose preparation included training sessions with Donald "Cowboy" Cerrone.

Hettes said he used the "basic S-mount armbar," adding that "I knew that he had a good ground game, so originally, I didn't want to go for any submissions at all."

But the opening presented itself, said Hettes, "and I went for it."

"It was great to see the crowd. It was intimidating at first," said Hettes. "This is a real nice venue."

145 pounds: Brett Thomas split decision over Rick Desper
Desper controlled the first round, and twice getting, but not finishing, rear-naked choke holds. In the second round, Thomas dropped Desper with a right hand. Desper grabbed a leg and covered up, and, later, shook Thomas with a hard left.

Desper scored a takedown in the third round, but Thomas was able to reverse him, and, later, to use a leg sweep and control much of the pace from the top until the end.

"I did fight him before, but with about 10 seconds left in the second round, he caught an armbar and submitted me. I knew that I could beat him standing up, and I knew that in Jiu-Jitsu, he's pretty good," said Thomas.

"He fights for Ground Control, and they're a real good team. But I was able to leg-sweep him in the third round and not let him hold me down," said Thomas. "I was ready for him this time. I developed a good defense for armbars."

135 pounds: Steve Deangelis unanimous decision over Lazar Stojadinovic
Deangelis hurt Stojadinovic on three different occasions, two of which eventually led to the latter being driven to the floor.

The first trip was the result of three, consecutive, alternating knees being driven to the face and chin, and the second, an uppercut that dropped Stojadinovic.

In the end, Deangelis had controlled the pace of the matchup for the victory.