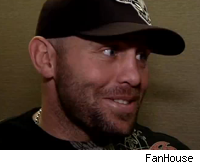 Shane Carwin was originally scheduled to fight Cain Velasquez at UFC 104 this past weekend, but the UFC decided to change its plans and have the big man face Brock Lesnar for the UFC heavyweight title at UFC 106 on Nov. 21 instead. It's an opportunity of a lifetime for the former NCAA Division II wrestling champion and two-time All-American football player at Western State College who has yet to lose in his first 11 professional bouts.

FanHouse recently spoke to Carwin about his simmering feud with Lesnar, training for the biggest fight of his life while his wife is pregnant, and his full-time job as an engineer. The full video interview is below.