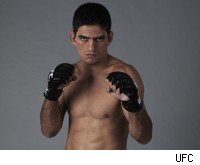 Brazilian welterweight Paulo Thiago, who was left without an opponent when Thiago Alves was transferred to fight Jon Fitch at UFC 107, will remain on the UFC 106 card, taking on Minnesota Martial Arts Academy's Jacob Volkmann.

Thiago's manager Wallid Ismail has informed Brazil's Terra Magazine of the update, though the matchup becomes one of four fights yet to be officially announced for the Nov. 21 card.

Thiago (11-1) is coming off the first loss of his career, dropping a decision to Fitch at UFC 100 in July. Thiago is considered a Top 10 welterweight for his UFC debut at UFC 95 in February, stopping Josh Koscheck with punches in the first round.

Like his opponent, Volkmann (9-0) will make his UFC debut with an undefeated record. Volkmann, who trains out of Greg Nelson's gym alongside UFC fighters Brock Lesnar, Sean Sherk and Brock Larson, was last seen fighting for Bellator in May, submitting early The Ultimate Fighter 9 contestant Kevin Knabjian with a brabo choke one minute and 42 seconds into the fight.

Volkmann's strength is grappling, as six of his nine wins have come by way of submission. The 29-year-old was also a three-time NCAA Division 1 All-American wrestler and last year won the FILA Grappling World Championships. Volkmann lost this past weekend to Olympian Ben Askren at the US Grappling World Team Trials.

Here's what the UFC 106 fight card is looking like: