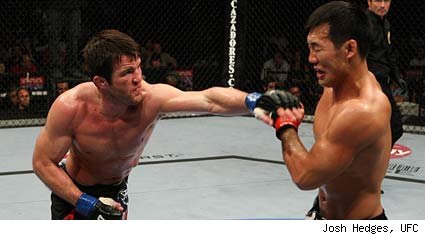 I've been banging the drum for a couple years saying the UFC needs to give Yushin Okami a shot at middleweight champion Anderson Silva. You won't be hearing that from me anymore.

After Chael Sonnen thoroughly dominated Okami with a unanimous decision win on Saturday night at UFC 104, Okami took a tumble in my rankings of the top 10 middleweights in mixed martial arts. So how far did Okami fall, and what does the middleweight picture look like now? My rankings are below.

Top 10 middleweights in MMA
1. Anderson Silva: The sport's undisputed best middleweight is expected to defend his title against Vitor Belfort at UFC 108.

2. Dan Henderson: He's currently a free agent who wants a lot of money to fight Silva. If he's going to return to the UFC, he'll have to settle for a lot less money than he wants, and for at least one fight before he gets another title shot.

3. Nate Marquardt: Currently waiting around to see what happens with Henderson, Marquardt says it doesn't make sense that Belfort is getting a title shot.

4. Vitor Belfort: What Marquardt doesn't understand is that UFC title fights are less about giving a shot to the guy who has earned No. 1 contender status than they are about selling the fans on compelling match-ups. The fans have already seen Silva beat Henderson and Marquardt, and now they want to see what happens when Belfort gets his chance.

5. Jake Shields: Shields will give Jason "Mayhem" Miller a beatdown and win the Strikeforce middleweight belt on November 7.

6. Jorge Santiago: The Sengoku champ will fight Mamed Khalidov on November 7 -- a big day in MMA, both here and in Japan.

7. Demian Maia: He was knocked senseless by Marquardt, but he still has the best pure submission skills in the sport.

8. Chael Sonnen: I'm hoping he'll take on the winner of the UFC 105 bout between Michael Bisping and Denis Kang. That would be a great fight.

9. Yoshihiro Akiyama: After winning his UFC debut at UFC 100, he's taking on Wanderlei Silva in Australia in February.

10. Yushin Okami: Okami shouldn't be totally dismissed after his loss to Sonnen -- he's still 7-2 in his UFC career -- but we can forget about ever hearing him mentioned as a title contender.