MMA Top 10 Light Heavyweights: Shogun Moves Up With a Loss 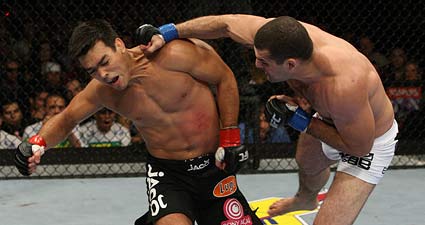 Lyoto Machida is still the light heavyweight champion of the UFC, but not many people agree with the three judges who allowed him to keep his belt after 25 minutes in the Octagon with Shogun Rua on Saturday night.

So does Machida keep his status as the top light heavyweight in MMA in my latest Top 10? He does, but Shogun also moves up in the rankings after a very close fight with the champ. The full rankings are below.

Top 10 light heavyweights in MMA
1. Lyoto Machida: If forced to pick right now, I'd pick Machida to win in a rematch with Shogun, and so I'm keeping him at the top of these rankings. But he's not as far ahead of the pack as I thought he was before Saturday night.

2. Anderson Silva: The UFC middleweight champion would be the toughest threat to Machida at 205 pounds, but they insist they'll never fight each other.

3. Shogun Rua: The day after Machida won the light heavyweight title, I wrote that Shogun was the fighter in the UFC most likely to take Machida's title from him. I still feel that way. Rua fought a great tactical fight against Machida on Saturday night, and I think he'll give Machida a tough fight in their rematch, even though I'll give Machida a slight edge.

4. Rashad Evans: The former champ is a couple wins away from getting another crack at the title, but I don't think he'll ever match up well with Machida.

5. Forrest Griffin: He's on a two-fight losing streak, but Griffin's win over Shogun looks even more impressive after how well Shogun fought on Saturday. He's probably not too far away from another shot at the title, especially if Shogun beats Machida.

6. Rampage Jackson: He's acting right now, but I think he'll be back in 2010 for a fight with Evans.

7. Dan Henderson: We don't yet know where Henderson will fight next; he could re-sign with the UFC or become one of the most visible stars in Strikeforce.

8. Thiago Silva: His fight with Evans will put the winner a step closer to the title, although I can't picture either of them winning a rematch with Machida.

10. Rich Franklin: His loss to Vitor Belfort pretty much ensures that Franklin isn't going to be fighting for a UFC title again, but he's still very relevant as a gatekeeper at either middleweight or light heavyweight.