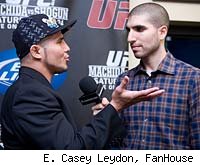 LOS ANGELES -- Joe Stevenson looked like the happiest man in California on Saturday night before and after his UFC 104 victory over Spencer Fisher. When FanHouse spoke to "Joe Daddy" about his second-round submission win, he praised the work of his new coach, Greg Jackson, and said that he now has a new lease on life.

Stevenson also explained why he believed Fisher was "oily" during the fight and why his dream match would be against Shinya Aoki. Check out the full video interview below.