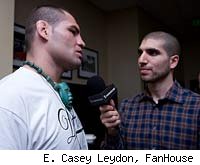 LOS ANGELES -- Whether or not you believe the Cain Velasquez-Ben Rothwell UFC 104 fight was finished early on Saturday night, it would be difficult to deny the fact that Velasquez dominated "Big Ben" for the entire fight. The now 7-0 Velasquez continues to improve each and every time he fights, and when FanHouse spoke to him at the post-fight press conference he said he was ready to face the winner of the Brock Lesnar vs. Shane Carwin heavyweight title fight at UFC 106 next month.

Velasquez also talked about whether or not he believed the fight was stopped early and his thoughts on his performances. Check out the video below.