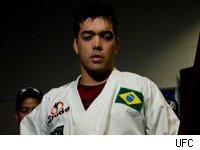 Mauricio "Shogun" Rua won over the fans, but it was Lyoto Machida who walked away with the UFC light heavyweight championship at UFC 104 Saturday in Los Angeles.

In a very close fight, Machida won on the scorecards 48-47 through five rounds. According to the judges, two gave Machida the first three rounds and one gave the retaining champ rounds two, three and four.
UFC 104 Coverage | Exclusive Interviews | Post-Fight Press Conference

Machida, though, was the recipient of boos during the announcement of the scores, as it appeared many felt Rua should have been given the nod for effectively wearing Machida down with kicks to the legs and body. But one thing's for sure, Rua was far and beyond Machida's toughest challenge thus far. Machida entered the fight with an incredible feat of seven UFC victories without losing a single round, and Rua put an end to that.

As close as the main event was, the supporting fight was completely lopsided. Cain Velasquez improved to 7-0 by taking UFC newcomer Ben Rothwell down with ease and pounding him out. The end of the fight came by referee stoppage at 58 seconds into the second round.

In lightweight action, Gleison Tibau bested Josh Neer with a relentless assault of takedowns to win the unanimous decision.

In the pay-per-view opener, Anthony Johnson knocked out Yoshiyuki Yoshida with a right hand in 41 seconds.