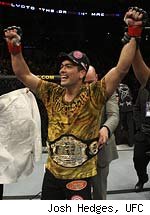 UFC light heavyweight champion Lyoto Machida defended his belt for the first time Saturday at UFC 104, defeating Shogun Rua to retain his title and remain undefeated in a tough, close unanimous decision that left the fans in Los Angeles booing.

"I trained hard for this fight for four months," Shogun said afterward. "My corner was telling me I won the fight. I feel like I won this fight but a fight is a fight. What can I do?"
More Coverage: UFC 104 Results | Fight Stopped Early? | UFC 104 Coverage
Video: Watch UFC 104 Post-Fight Press Conference
"Whenever he wants, I'll try again," Machida said when asked if he'd be interested in giving Shogun an immediate rematch. "No problem."

Shogun started the fight by throwing a kick, and Machida responded by grabbing Shogun and landing a couple of knees. The two clinched against the fence after that, and after they separated Machida landed another hard knee to Shogun's chin. They were both cautious and attempted to pick their shots and counter-strike throughout a very close first round.


More Interviews: Joe Stevenson | Pat Barry | Chael Sonnen
In the second round, Machida landed a couple of punches and a kick early on, and when Shogun went for a single-leg takedown, Machida was having none of it, staying up and pushing Shogun off him. As the round wore on, Shogun landed a hard kick to the body and several knees. It was another close round.

In the third round both fighters looked hesitant, and a few fans could be heard booing. But in the final minute of the fight they both came alive, trading punches against the fence. The round could have gone either way, as the flurries of action saw both fighters trading strikes.

The fourth round saw the fight go to the ground for the first time -- but just for a second, when Machida slipped while attempting a kick but was able to keep Shogun from doing any damage and quickly get back to his feet. There wasn't much contact either way, and it was yet another close, even round.

In the fifth Shogun landed several kicks, while Machida landed a couple of very solid knees. Shogun also landed some good punches. The fight ended with both fighters raising their hands in victory.

Machida improved his professional record to 16-0. Rua fell to 18-4.