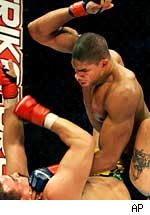 FanHouse has live results of DREAM.12 at the Osaka-jo Hall in Osaka, Japan.

DREAM.12 marks the first time ever that a major Japanese promotion will utilize a cage, a hexagon dubbed as the "White Cage." A trifecta of titleholders are scheduled for action: Strikeforce heavyweight champion Alistair Overeem, Bellator lightweight champion Eddie Alvarez and DREAM's own welterweight champion Marius Zaromskis.

Round 1: Hironaka moves forward with alternating punches. They size each other up. Parky sticks a jab. Parky works leg kicks. Parky hurts Hironaka with a counter right hook. Parky charges with a knee to the body. Parky dictating the standup fight. They trade leg kicks. Hironaka pops a right hand. Edge: Parky

Parky's corner throws in the towel (Parky could not see from his right eye) and Hironaka wins.
Hironaka wins via TKO - R1, 5:00
Chase Beebe vs. Yoshiro Maeda
Round 1: Maeda with left right left punches. Maeda aggressively attacks Beebe. Beebe weathers the strikes. Maeda lands leg kick. Beebe tries takedown but Maeda defends. Beebe catches a kick and takes Maeda down. Maeda scrambles out. Maeda catches a kick and puts Beebe on his back. Beebe lands punches from the bottom and Maeda responds. Beebe tries to escape and Maeda quickly takes Beebe's back and taps him out.

Maeda wins via submission (rear-naked choke) - R1
Tarec Saffiedine vs. Yoon Dong Sik
Round 1: Saffiedine lands a leg kick, and another. Dong with a one-twon and shoots. Saffiedine reverses into side mount. Doon escapes all the way to butterfly guard. Saffiedine stands and allows Dong to follow. Dong tries a judo throw but misses and gives up his back. Dong moves into clinch. The referee separates them and they restart with 29 seconds left. Edge: Saffiedine

Round 2: Saffiedine jabs and lands a leg kick. He tries a jumping knee and lands in clinch. Dong shoots and takes Saffiedine down with a single-leg. Saffiedine looks for a kimura, but Dong sits in halfguard. Dong with a possible banana split, takes Saffiedine's back. Dong works for the choke with one minute left. Dong can't lock it in and ground and pounds to end the round. Edge: Dong

Round 3: More of a feel out process to start round three. Dong shoots and misses. Saffiedine a bit more active with his boxing. The referee pulls out the yellow card for lack of action. Saffiedine tags Dong with punches. Dong shoots and pulls guard. Saffiedine lands a nice right. Dong avoids combos with a lazy shot. Saffiedine presses forward with short combos. Saffiedine pulls guard. Edge: Saffiedine
Dong wins via split decision
Tokimitsu Ishizawa vs. Katsuyori Shibata
Round 1: After a brief scuffle, they clinch. Shibata throws knees and punches. Ishizawa shoots his way out. Ishizawa shoots again and misses. Shibata comes forward with a combo and Ishizawa counters with a combo. They exchange punches. Shibata lands knees with the Muay Thai clinch. Ishizawa swings wildly. They clinch and Ishizawa throws high knees. Shibata clips Ishizawa with a left hand and Ishizawa stumbles down. Shibata pounces and wins by referee stoppage with right hands.
Shibata wins via TKO - R1
Zelg Galesic vs. Kazushi Sakuraba

Round 1: Sakuraba scores the single-leg takedown and drops back for a leglock. But he gives up his back and Galesic drops right hands. Sakuraba is taking a lot of damage but he holds on for a toehold. He switches to a kneebar and Galesic taps.
Sakuraba wins via submission (kneebar) - R1
Marius Zaromskis vs. Bae Myeon Ho
Round 1: Zaromskis comes out with a flying knee. Zaromskis lands a head kick and wins by knockout.
Zaromskis wins via KO - R1
Eddie Alvarez vs. Katsunori Kikuno

Round 2: Alvarez drops Kikuno with a right hook but Kikuno bounces back up. Alvarez catches a kick and goes to side control. Kikuno tries to escape and Alvarez attaches a guillotine choke. Kikuno pops his head out. Back to their feet, Alvarez unloads. Both fighters look weary. Alvarez takes Kikuno down into halfguard. Alvarez attempts an arm-triangle. Kikuno taps.
Alvarez wins via submission - R2