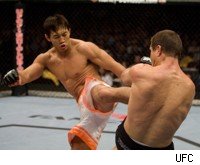 The first bout is scheduled to begin at 7:30PM ET. The live blog begins below.

Round 1: Fight starts standing, with Struve throwing leg kicks. 30 seconds in, Gormley, who is making his UFC debut, takes him down, and starts throwing punches. Gormley slams Struve while he is in "Skyscraper's" closed guard. After a bit of ground work, Struve gets up, and begins raining blows in Gormley's half guard. The referee is close to stopping the fight, but Gormley escapes the onslaught. Struve drops down, and then quickly secures a triangle choke. Gormley taps out shortly thereafter.

Round 1: After a quick exchange standing, Kingsbury, the American Kickboxing Academy product, takes Al-Hassan down, and quickly moves to the mount. Al-Hassan secures Kingsbury's left hand, but Kingsbury rains punches with his right. The crowd begins to get restless because there isn't much action on the ground, but ref doesn't stand them up. Kingsbury ends up in Al-Hassan's closed guard before the ref finally stands them up. Al-Hassan looks very awkward standing up and doesn't keep his hands up. His stance is also not so smooth.

Round 3: Both fighters look very tired. They decide stay standing for the majority of the round, trading weak shots. With less than two minutes left, Kingsbury presses Al-Hassan up against the cage, and eventually takes him down the single-leg. Al-Hassan quickly jumps up, though. Crowd begins to boo again with 50 seconds remaining. Kingsbury pushes the action with seconds remaining.

Round 1: Fight starts with Kimmons trying for a takedown, but Rivera stuffs it. Slow action in the clinch. Rivera connects with a nice combination. Rivera lands another solid combination. Eventually, Kimmons takes Rivera down. Kimmons throwing elbows and punches in Rivera's half guard, as they are pressed on the cage. Rounds ends.

Round 2: Rivera throws a wild combo to start. He is opening himself up to the clinch too easily. Kimmons takes him down, but Rivera ends up in Kimmons' guard throwing punches while standing over him. Kimmons has a welt over his right eyebrow. Rivera throw body elbows and punches to the face. Kimmons gets up. Rivera locks in a head clinch, throws a sloppy knee. Both fighters look very tired.

Round 3: Rivera drops with a left seconds into the rounds. Kimmons is bleeding pretty badly. Rivera just seems too tired to finish the fight. The ref stops the fight momentarily to see if Kimmons cut is dangerous, but it isn't. Rivera goes right back into Kimmons' guard, throws some more punches, and finally, the ref calls a stop to the fight.

Round 1: After a brief exchange standing, Sonnen presses Okami up against the cage, trying to take him down. He eventually gets the takedown, and as Okami scrambles, Sonnen secures his back. Sonnen tries for the rear-naked choke, but Okami escapes. Back in the center of the Octagon. Okami's standup is looking good, as he is picking his shots. Sonnen seems a little more aggressive. Sonnen takes Okami down with a double-leg, but Okami bounces back up. Round ends.

Round 2: Both fighters collide early into the round, as Sonnen tried for the takedown and Okami went for a combo. Sonnen throwing some nice leg/punch combos, including a spinning back kick. Both fighters are actually looking quite good standing. Sonnen's jab is working. Sonnen connects with a left and then an overhand right. Round ends.

Round 3: Okami controls center of the octagon to start the round. Both me are letting the leather fly, throwing combos. Sonnen takes Okami down, and quickly secures his back. Sonnen trying for a suplex, and he is connecting with knees to Okami's thigh. Okami falls down, and tries for a kimura. Sonnen escapes as the round ends.