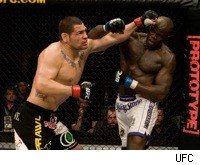 Amazing but true: Cain Velasquez and Ben Rothwell are separated by just one year in age, yet the former is considered a rising prospect while the latter is thought of as a grizzled veteran.

Their paths cross in a co-main event, heavyweight clash at UFC 104 this weekend, with much at stake for both men. So how will the fight go? Let's take a look at how it will likely play out.

The 27-year-old Velasquez is 6-0, and in his last fight bested Cheick Kongo in a unanimous decision. In the process of that win, however, some of his followers jumped off his hype train, worried that Kongo had exposed a chink in his armor by staggering him twice with strikes.

Kongo has never been known for his takedown defense, and Velasquez was able to shake off any damage, take him down repeatedly and control him on the ground en route to the win. But some wonder if Kongo's success on his feet against Velasquez is a sign of things to come as Velasquez moves deeper into the UFC title picture.

Instead of looking at his moments of struggle as a negative, perhaps it should be thought of positively that Velasquez was able to take those big punches, compose himself and execute his gameplan effectively. Sure it would be better to avoid taking damage altogether, but not everyone can be Lyoto Machida and constantly stay out of trouble. The first time a fighter is truly tested, you learn about his mental makeup, and Velasquez showed that he wouldn't allow himself to be steamrolled, and that he certainly wouldn't cover up and surrender.

So how does this project to his match with Rothwell? Such things are never easy to predict. Rothwell may have heavier hands than Kongo (that point is debatable), but he isn't nearly as sharp or technical with his strikes. Rather, he's quite at home in a brawl and may well try to draw Velasquez into one with the idea that with his experience, he'd be more likely to land a fight-altering blow.

Velasquez, however, is unlikely to let him take it there. He understands the wrestling advantage he holds on most (he was a two-time All-American at Arizona State), and realizes it is an edge he can exploit in many of his fights, including this one.

Rothwell's takedown defense has never been a particular strength, and it should be noted he was taken down twice by Andrei Arlovski in their July 2008 Affliction bout, and Arlovski does not have nearly the wrestling credentials as Velasquez.

Like many of the gigantic heavyweights that seem to be multiplying in the UFC world, the 6-foot-5 Rothwell (30-6) will have a sizable reach advantage on Velasquez. Rothwell needs to maximize that upper hand by keeping Velasquez on the outside and punishing him when he shoots. If he can stay upright, he will shift the tone in his favor. Against Velasquez, it is certainly a big "if."

Velasquez's striking game, meanwhile, continues to improve, and his chin held up even against the technical, powerful Kongo. In the wrestling and ground games, though, he is a level above Rothwell, and expect that difference to be clear on Saturday night.

Velasquez's best asset aside from his wrestling is his gas tank. He never seems to tire, and there is empirical proof behind the observation. According to Compustrike, Velasquez is the only heavyweight in the top five for most thrown (165) and landed (87) strikes in one round of a fight.

When he fought Kongo, he threw 82 strikes in the first, 113 in the second and 165 in the third, bucking the trend of heavyweights tiring in the late rounds, and remember, those numbers improved even after being hurt with strikes. That level of tenacity will play a role in this matchup if the two make it into the second and third rounds, which seems likely. Can Rothwell keep up with that pace, especially while defending constant takedown attempts? It's unlikely.

In the end, Velasquez-Rothwell may look somewhat similar to Velasquez-Kongo, ending with Cain on his way to a higher-profile matchup as a result of a win over a more experienced foe. The prediction is Velasquez by decision.