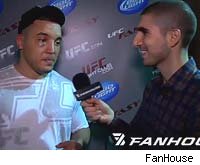 LOS ANGELES -- Pat Barry was very emotional following his second-round TKO victory over Antoni Hardonk on Saturday night at UFC 104, and the former K-1 fighter, who has been involved in more than 30 kickboxing or MMA fights, told FanHouse immediately following fight that this was the biggest victory of his life.

Barry also talked about his improvement as a complete mixed martial artist and why he wants to fight Cheick Kongo next. Check out the video below.