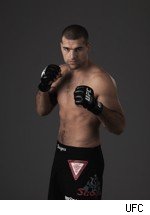 Before every big MMA fight, Sherdog polls a bunch of fighters, trainers and others in the MMA community and asks them to give their picks. With UFC 104 one day away, it's time to publish the pros' picks for the main event between Lyoto Machida and Shogun Rua -- and it's almost impossible to find anyone picking Shogun.

Sherdog polled 23 people and came up with just one -- a 2-2 fighter named Robin Black -- who was willing to make a serious case that Shogun will win. Here's what Black had to say:
When you hear a guy talking about defending his title five times, then fighting Brock Lesnar, you could be forgiven for thinking he's looking past his opponent. Hell, probably everyone is looking past Shogun. His in-your-face style is tailor made for The Dragon's near mythical lightning counter fighting. But don't just arbitrarily count Shogun out. He's a proud, explosive athlete who's been training for his title shot. And this is the UFC. Anything can happen. I'm going out on a limb -- and being mocked by my training partners here at Xtreme Couture Toronto -- and picking Shogun by TKO.

Although I'm picking Machida to win this fight, I actually think there's something to what Black is saying: Machida does sound in his public comments like he's expecting to be the light heavyweight champion for a long time, and Shogun is an explosive fighter who should be in the best shape he's been in since the old Pride days. I like seeing Black sticking his neck out and picking an upset.

I'm not going to join him, though. There's a reason just about everyone is picking Machida.