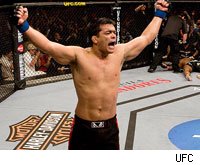 In short order, Lyoto Machida has become MMA's golden child, captivating fans around the world with his inimitable style and perfect record. But it wasn't too long ago that Mauricio "Shogun" Rua was MMA's flavor of the month.

So will Machida continue his unbeaten run at UFC 104, or will Shogun rediscover the glory that made him one of the sport's rising stars just a few years ago?

Let's take a look at how Machida-Rua will play out.


Right now, Machida (15-0) is MMA's unsolvable riddle, baffling opponents with a singularly unique style that complements his many physical gifts. But it wasn't too long ago that many found him boring.

Starting with his win over Tito Ortiz, Machida's reputation took a sharp upturn, and he capitalized on the momentum with a first-round KO of the formerly unbeaten Thiago Silva before taking out Rashad Evans with another knockout to win the UFC light-heavyweight championship.

When you analyze his style, you find that his success starts with his unmatched footwork. Machida constantly works to create angles and spacing that favor him in an exchange, which is why he always seems to answer a missed punch with a connected strike. Specifically, the southpaw tries to keep his right foot outside of his opponent's left foot, so when his foe throws a punch, he can dodge it while answering with a left down the middle. Most fighters try to keep their lead foot in a similar position, but few do it as consistently as Machida, which explains why he always seems to get the best of exchanges.

In addition, that foot positioning also often sets him up for one of his favorite techniques, the foot sweep takedown.

That footwork works in perfect symmetry with his stance. From his celebrated karate background, he's adapted a posture that has him slightly leaning back at the waist while circling. By contrast, most fighters lean forward with the conventional thinking being that it moves you closer to your target. Machida, however, thinks differently. Because of his unusual posture, Machida has an extra split-second to avoid being hit. And in that split-second, his superior footwork has him ready to fire an accurate counterstrike.

Finally, his kicks are so whip-fast that most opponents are left standing at a defensive distance, and when they dare to move into striking range, they are often punished for it.

So how do you solve this problem?

Rua (18-3) has been training for four months straight in preparation, but it's unlikely that time will override the fight instincts that have been ingrained in him for years and made him successful. His game has always been based off hyper-aggression, with the belief that he could overwhelm opponents with offense.

Much like a running team that makes it to the Super Bowl does not abandon the run against an opponent that puts eight defenders near the line, neither will Shogun abandon his favored mode of attack in the biggest fight of his life. The running team simply adds new wrinkles to its playbook, and Shogun will likely do the same, so don't expect to see him coming out looking for a series of takedowns a la Matt Hughes.

With that in mind, it seems the most beneficial improvement he could make would be in his footwork. Machida is always going to be hard to hit, but Shogun can also make himself a more elusive target by outworking Machida in positioning.

Rua's best bet to start his offense is with kicks to the legs and body. While not flashy, over time they often succeed in slowing down an opponent with good movement. They are also relatively high percentage in landing and do not leave the delivering fighter overexposed for a counter. Since Machida's attacks are often triggered by his opponent's first move, that would be the safest route for Shogun.

When he does move forward to throw strikes, he has to do it with conviction. Too often we have seen fighters facing Machida get caught in between a strike and pulling back, giving him an open target. Of course some of that is caused by the previously mentioned spacing issues that Machida creates. Nonetheless, a power overhand right is more likely to move Machida out of the way rather than craft a counter.

Rua will probably spend most of the first round finding the range. Since this fight is scheduled for five rounds, he should be in no rush to make something happen prematurely.

In the meantime, he has to be on guard against deception. One of the truly underappreciated parts of Machida's game is his ability to throw rare combinations. When he faced Evans, the first knockdown he scored was off a left kick to the body followed immediately by a straight left. Another time he landed a combo consisting of a right kick to Evans' lead leg followed by a left head kick.

In close quarters, Shogun might have a slight edge with his Muay Thai skills, but as previously noted, Machida is a master of the foot sweep takedown. Shogun has excellent balance and will need it in those situations, because once Machida gets a fighter down, he lets his killer instinct out.

Machida is truly a fighter with no real weaknesses, and one who makes almost no mistakes. Shogun would need to fight a near perfect fight or land a perfect punch, and given his propensity to brawl, it seems likely he'll eventually find himself in a disadvantageous position that Machida will capitalize on.

I expect Shogun to give Machida a better matchup than some are expecting, but to eventually make a mistake that will lead to the end. The most likely outcome is Machida by TKO, somewhere around the third round.