John Rallo: From Celebrity Bodyguard to MMA Pioneer for Maryland 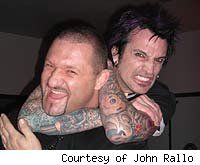 John Rallo pursued MMA's sanctioning in Maryland until he got a submission. That came in May of 2008, when governor, Martin O'Malley, made the state the country's 35th to legalize MMA.

In an exclusive interview with FanHouse, Rallo, owner of three training facilities called Ground Control, discusses what it took for him to get MMA sanctioned, his past as an MMA fighter and celebrity bodyguard for Tommy Lee and others, and "Shogun Fights," Maryland's first ever MMA event this Saturday night at Baltimore's First Mariner Arena.


FanHouse: Can you summarize what it took to gain acceptance for MMA in Maryland?

Rallo: Politics and common sense don't always go together. I waited until I had some friends and family who are in local government now. I waited until my people got in place.

Then I went to the state athletic commission and asked what the process was. I found out what they needed from me to make them feel comfortable that you could regulate this event.
I am fortunate that MMA found me, and I am grateful for the life that it has given me so far.
-- John Rallo
[State commission director] Pat Pannella is the man I met with, and he told me the things that he would like to see in order for them to feel comfortable. I went and got those things together. Then I gathered a lot of experts around town.

Nick Lembo, of the New Jersey State Athletic Commission, this would not have happened without him. He's a wealth of knowledge and the gentleman that wrote the unified rules that the UFC uses. There were so many others -- Ron Dejuliis. Dr. Frank Reid, Ed Hitchcock and Timothy Perry from Gordon Feinblatt, who are lobbyists.

State Senators Joan Carter Conway was the first to jump on the bill, Kirill Reznik, of Montgomery County, sponsored the bill on the delegate side. Both bills passed overwhelmingly.

Others who helped me were delegate Nathaniel Oakes, ringside physician, Mike Kelly, of New Jersey. My business attorney, Ira Rainess, and Bruce Spizler, with the state commission.

Marc Ratner of regulatory affairs and attorney Michael Mersh came in to testify for me. I was given a platform to educate people by Mickey Cucchiella and Ed Norris.

FH: Any advice for someone looking to do in their state what you've done in Maryland?

Rallo: My advice is to anybody out there trying to get this legalized is to educate your politicians before you go in front of them and speak. What I did was that we had a study here from Johns Hopkins which showed the safety of mixed martial arts versus boxing and football and other contact sports, so you can't argue with the facts, which were coming from one of the best hospitals in the world.

Dr. Ed Hsu was one of the doctors was on that study. I put the facts into their hands, and answered questions on a personal basis. So when I came to testify, I didn't have a lot of opposition.

FH: What is your athletic background?

Rallo: I played football and baseball and I wrestled. I made All-Metro in football during my junior and senior year, and I was an honorable-mention in baseball as a junior. I played amateur baseball for The Yankee Rebels, which finished second in the country.

In wrestling, I was third in a tournament with no practice, pinning the No. 2 and No. 3 seeds in the tournament.

I graduated from McDonogh School in 1986, and attended Widener University before transferring to Towson State. I never finished college, but I went into business for myself as a teenager. 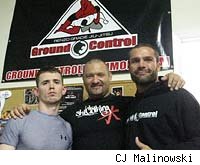 FH: When and where did you first begin competing in mixed martial arts?

Rallo: That started in 1998. My first tournament ever, I had 16 guys in my weight class. I entered with no formal training and won the division despite having to wear a gi. I met my first teacher, Mark Finley, there.

FH: What other occupations have you had?
Rallo: I was a former bodyguard for people like Tommy Lee, Pam Anderson, Sylvester Stallone and Dave Navarro.

I've got pictures of me and Tommy and Pam, and me and Stallone.

FH: Any interesting stories about any of the stars you worked for?

Rallo: Tommy's awesome. I've worked with him for extended periods and months at a time. The guy is super cool, very nice guy, and like a big kid.

Here's a good one, my baptism into the system. My first thing I did for him was a New Year's Eve weekend. I get there, we do rehearsals, New Year's Day comes, and we go downtown to Old Las Vegas, and they perform live.

We're on Carson Daly's New Year's show. And my mom calls me and says, "I just saw you on TV." We get done there, and we go to a concert down there for Direct TV's music channel.

They get done doing the concert there, and we drive from there back to the Hard Rock, where they're the count-down band for New Year's Eve at The Hard Rock. So they play at the Hard Rock, and Tommy goes up straight to his room and has his entire DJ equipment set up in his suite.

Now he's been going all day, and this is the third performance now. He's upstairs in his room until six in the morning DJing with people. Before we came, we told hotel security, 'This is what's happening, and if you don't like it, we're staying someplace else.' And they said, 'Nah, it's New Year's Eve, you guys do what you want.'

The Hard Rock comped, like 150 rooms that night for noise complaints to accommodate Tommy's party. They didn't come and say nothing to us. Their security were like the door men for Tommy's party. We would tell them who could come in and who couldn't, and they would watch the door for us.

Rallo: I could be out doing that full-time, but I've turned tours down because I'm trying to grow the school and because of this show. I'm missing opportunities to see the world and to make good money because the pay is good.

The last two summers, the two of the largest grossing tours were Motley Crue-Fests. I turned both tours down because I was too busy. This year, it was Godsmack, Motley Crue, Theory Of A Deadman and Hinder.

Last summer, it was Papa Roach, Buckcherry and Motley Crue. Any time you're on tour, it's a networking opportunity, besides the fact that you're getting paid. You're meeting other celebrities, and if they like you, they call you for things.

That's a sacrifice that I've made to do what I love, which is this sport. The bigger picture is to bring mixed martial arts to Baltimore.

FH: What are your personal accomplishments in MMA?

Rallo: I was 6-0 as a pro. I was third in the Abu Dhabi trials. I won numerous grappling titles in many grappling associations, including NAGA and Grapplers Quest. I was able to coached several champions in grappling.

All three of them will be fighting on Saturday night.

FH: What is the itinerary for Saturday night?
Rallo: The doors open to the public at 6 p.m., and there will be some cars set up on the arena floor all evening for appearance only. One of the sponsors -- No Limit Inc. -- customized these vehicles.

There's a VIP dinner catered by Ruth's Chris Steak House, and an open bar and buffet style dinner from 5-7. Fights start at 7, and should go until 10.

Immediately following the show is the official after party at Sonar, with free admission given to those holding a Shogun Fights ticket.

FH: Any qualms about hosting this on the same night as UFC 104?

Rallo: Well I did this because it's the bye week for the Ravens, and I have season tickets.

UFC 104 will be on the TV's at the after party at Sonar. One room -- which holds about 400 people -- will be dedicated to the fights. There will be no music played on because the fights will be turned up.

The other room will have a DJ, dancing. That room holds over 1000. Fights will be on these televisions, also, but music will be playing.

FH: Will any of the sport's celebrities be on hand at the event?

There's Leonard Garcia, a top contender in WEC at 145. And there's UFC veteran Kurt Pellegrino, who will be fighting Frankie Edgar for the right to fight B.J. Penn.

Nick Lembo and Renzo, I want to give them awards and present them with something for their service.
FH: What are your hopes for this inaugural show?

Rallo: We have already accomplished the goals that the arena set for us financially and attendance-wise. My wish is for the fights to be exciting and for the fans to have a great experience.

I'm donating about 130 tickets to state wrestling programs and the wrestling community. We've got a bunch of college wrestlers and stuff like that, kids who weren't going to be able to come that will be there.

I'm hoping that some of these guys who don't have a career after college or after high school wrestling, maybe they'll become fans or maybe they'll come to Ground Control and want to compete.

I'm partial to the wrestlers because they come already wanting to train hard and not being shy from contact. That's why Brock Lesnar is able to compete at the level he's at, because he can kind of dictate where the fight's being fought.

The atmosphere, the appearance of the arena, the color guard, my ring card girls. The VIP party is catered by a top-notch restaurant like Ruth's Chris Steak House. I want this to be an event -- not just another fight.

FH: What is it about this sport that drives you?

Rallo: It is the greatest sport in the world, with the best conditioned athletes in the world. World and Olympic Champions from multiple disciplines compete in this sport. This sport taught me a lot about life and business.

It is not often that you get to make a living doing something that you enjoy, and I am blessed that I am able to do that. God-willing, I will be able to keep it up for many years.