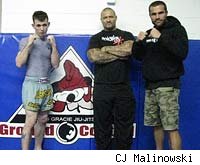 When Dave Daniecki debuts as a mixed martial artist on Saturday night, he will do so before a number of supporters in the stands at the First Mariner Arena in his hometown of Baltimore.

They will be "mostly my friends, who know I'm not quite wired right, and they kind of expected it and figured it was a good fit," said Daniecki.

But two people the 34-year-old Daniecki won't see in the stands are his parents, Ted and Nancy, who were behind him 100 percent as a standout high school wrestler.

"They were the most shocked when I chose to do this. They don't want to see anything happen to their boy, and I don't plan on anything happening," said Daniecki, who left his job as a pharmaceutical sales rep last month to devote more time to his training. "They won't come to this one, but they're kind of on the fence and they're warming up to it. I send them pictures and stuff, and they're asking me more questions. Another fight or two, I could see them showing up."

Daniecki will be fighting as a pioneer on the first-ever event -- "Shogun Fights" -- to be sanctioned in the state of Maryland before an anticipated large crowd at The First Mariner Arena.

Daniecki and Ryan Mackin, another local making his professional debut, agree that their opportunities could not have come at a more appropriate time.

"I couldn't have scripted it any better. I had roughly four or five years of practicing and training, and the past two years I've fought as an amateur, so I feel like I've put my time in," said Daniecki, who also starred as a high school lacrosse player and who will compete as a middleweight (185 pounds).

"I have been working hard. I'm in there four or five days a week a couple of hours a day. I feel like I'm well-rounded, and I feel like I'm a developed fighter," said Daniecki. "Obviously, as a former wrestler, I'm comfortable on the ground. And, now, I'm just as comfortable standing. So I feel good. I feel like this is the perfect time to make my pro debut."

Daniecki and Mackin compiled amateur records of 4-0 and, 9-0, respectively, while training at one of the three Maryland-based Ground Control facilities owned by John Rallo, a 40-year-old former heavyweight fighter whose dogged determination led to their state's legalization of the sport in May 2008.

Like Daniecki, a former Maryland Scholastic Association champion at Loyola High in Towson, MD., Mackin was a stellar high school wrestler, having earned a state title at Hammond High in Howard County.

Each credits boxing and Jiu Jitsu coach Henry Smith with helping them transition into the sport from their wrestling backgrounds.

"This is definitely the right place, although time-wise I wish I could have done it earlier," said Mackin, 27, who will debut at featherweight (145) after scoring four knockouts and submitting three of his amateur opponents.

"I'm a corrections officer and I'm there full-time, 40 hours-plus a week. I run a wrestling club in the offseason, coach six days a week during the season. I have had a lot of priorities taking up my time, so this has been a longtime coming," said Mackin.

Unlike Mackin, Daniecki made that decision on his own, leaving his regular job "a month ago" to devote himself full-time to his MMA career.

"That paid the bills, and that was fun, but I'm just doing this at least for right now. I've put a lot of time and focus into talking to sponsors, training a lot and staying focused. I want to put everything into this right now," said Daniecki.

"As a wrestler, you know, you have to be a little bit off in order to be able to get punched in the face all the time. Guys that have that background, you have a leg up coming in," he added.

"You've cut weight, you know it's one-on-one, you've been under pressure before. It's a state of mind," said Daniecki. "It's imperative and (to have) the best state of mind, and then you can learn punching and how to kick. That wrestling preparation goes a long way toward getting into a cage with somebody."

Mackin and Daniecki will each go three, five-minute rounds on Saturday night, something they're both confident they can do.

Unlike Daniecki, when Mackin walks out to the meet his opponent, Doug Sonier, out of Pennsylvania, he will do so before an arena of some of his closest supporters.

"My roommates are coming to watch me," said Mackin. "Friends I grew up with will be there. And my sister, Mandy, who will be the first family member who will ever see me fight."