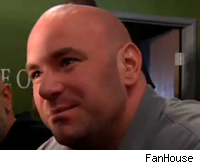 LOS ANGELES -- At Thursday's UFC 104 press conference, Dana White talked about some of the controversy surrounding this season's edition of The Ultimate Fighter. White took exception with Roy Nelson claiming Kimbo Slice got special treatment on the show, and called the former IFL heavyweight champion an "idiot" and a "jacka**." White also called this season's cast members "a bunch of crybabies."

White also brushed off Rampage Jackson's claim that the show's editing is making him look bad. Check out the video below. (Warning: video contains some explicit language.)