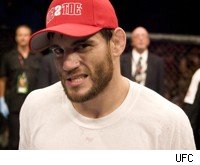 The second- and third-best welterweights in mixed martial arts are likely to meet in the Octagon in December, as Thiago Alves is expected to get a rematch against Jon Fitch at UFC 107.

Fitch's planned fight at UFC 106 with Ricardo Almeida was called off because Almeida suffered a knee injury, and the UFC decided to give fans an even better fight instead: According to MMA Junkie, Thiago Alves is poised to fight Fitch at UFC 107. Alves had been slated to fight Paulo Thiago at UFC 107, but an Alves-Fitch fight is a much better bout, and one that will make fans in Memphis, where UFC 107 will take place, very happy.

Alves and Fitch already fought once before, at UFC Fight Night 5 in June of 2006, with Fitch winning by second-round TKO. Since then Alves and Fitch have each gone 7-1, firmly establishing themselves near the top of the welterweight division.

The problem, of course, is that for both Alves and Fitch, their one loss was a one-sided beating at the hands of UFC welterweight champion Georges St. Pierre. That means that even though the winner of Alves-Fitch 2 will be the undisputed No. 2 welterweight in the world, he probably won't be very close to another title shot. St. Pierre has already proven he's a lot better than both Alves and Fitch.

Still, there's no shame in being the second-best welterweight in the world, and Alves vs. Fitch will be a very good fight.