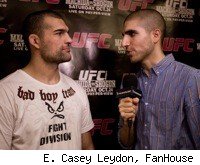 LOS ANGELES -- When the UFC announced that Shogun Rua would be receiving a light heavyweight title shot against Lyoto Machida at UFC 104, a lot of eyebrows were raised. But the 2005 PRIDE FC middleweight Grand Prix winner doesn't seem bothered by the fact that few believe he even has a shot against Machida. In fact, most online polls and oddsmakers have Shogun listed as an overwhelming underdog, and when FanHouse spoke to the Brazilian fighter at Wednesday's media workout, he appeared ready to shock the world, much like he did as a 23-year-old in 2005.

Check out the full video interview below.