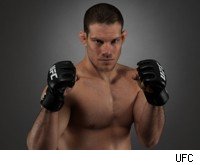 Ricardo Almeida has been forced out of UFC 106 on Nov. 21 due to a knee injury and his scheduled opponent Jon Fitch will receive a new opponent at a later date.

Fitch revealed on his Twitter late Wednesday the bout cancellation and added that he has already been presented with a new offer, "I get a bigger, better fight instead. Can't say who yet, but lots of you have been waiting for this fight [for] a long time."

Almeida, who was scheduled to make his welterweight debut, is 3-1 as a UFC middleweight, but realized after his Matt Horwich fight that he was undersized fighting at 185 pounds. He fought once more at 185 to compete near his hometown in New Jersey at the UFC 101 event in Philadelphia and defeated Kendall Grove by unanimous decision.

Fitch won both his fights in 2009 by unanimous decision against Akihiro Gono and Paulo Thiago. The AKA fighter fought 14 months ago in a losing effort against Georges St-Pierre for the welterweight title.

Almeida vs. Fitch had been scheduled to air on the pay-per-view card of UFC 106.