UFC's Joe Stevenson Ready, Willing to Walk Away From MMA Any Time 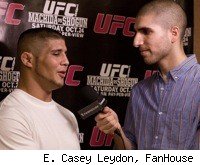 LOS ANGELES -- Prior to Joe Stevenson's June victory over Nate Diaz, there had been talk that another loss would mark the end of his UFC career. Thankfully for him, though, Stevenson, who had previously lost three of his last four fights, won the bout in impressive fashion, and all of sudden, regained his status as a major player in the UFC lightweight division.

But "Joe Daddy" told FanHouse on Wednesday that he would be fine walking away from his MMA career right now if he had to. The father of four, who faces Spencer Fisher at UFC 104 on Saturday, also said that training with Greg Jackson in Albuquerque, N.M., has rejuvenated his career. Check out the video interview below.