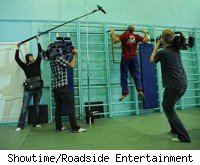 
"Fedor is beyond captivating as a fighter, and more so, as a man," director Ron Yassen said in a press release. "It's a pure joy to film him so intimately as he strives for perfection in life and sport with grace and charm. While training for this most important match, he kindly opened up his life to us in and out of the ring, without the ego that often comes with being the very best at one's craft."

Camera crews the past week have been following Fedor's training camp as well as family life at his home in Stary Oskol, Russia as he readies to face the unbeaten Rogers, who will be documented at his fixtures in Minneapolis, Minn.