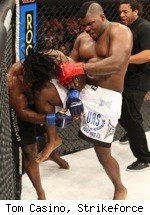 On this week's jam-packed edition of The MMA Hour, we first spoke to heavyweight Brett Rogers about his showdown against Fedor Emelianenko on Nov. 7. Rogers was his usual confident self, predicting what round and time he'll beat the "The Last Emperor."

Later in the show, we talked to Anthony Johnson about his UFC 104 fight against Yoshiyuki Yoshida. "Rumble," who weighed 17 pounds over the 171-pound weight limit less than a week before the fight will finally get a chance to shine on pay-per-view this Saturday night. Finally, we were also joined by middleweight Chael Sonnen, who faces Yushin Okami on the UFC 104 undercard. Sonnen called Okami a "nuisance" and said a win over the Japanese fighter should put him right back in the mix for the 185-pound title. Watch or listen to the show below.