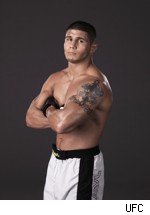 When Joe Stevenson steps foot inside the Staples Center in Los Angeles on fight night at UFC 104, it will be somewhat of a longtime aspiration fulfilled.

"I was born in Torrance at UCLA Medical Center and I always grew up living in Lennox, like wanting to go to The Forum to watch all the big boxing fights and stuff and always thought I was going to get a chance to fight at The Forum," Stevenson said. "Now I see today I'm at the modern Forum, which is the Staples Center, and I'm so excited actually to be able to fight there, but still in the back of my head I wished that it was The Forum because as a kid I wanted to fight there."

In this exclusive interview with FanHouse, Stevenson talks about his training at Greg Jackson's gym for his fight against Spencer Fisher, voices his displeasure at being ranked lower than Fisher and tells us how he intends on changing that.

You'll have the hometown fans rooting for you. Does the location of a fight matter to you?
I think location is important in a fight. Everything. From location, to altitude, to the time you fight due to the fact of when you've been training so your body performs well at that time. Everything as a whole is important, so definitely, having the fans behind you – they're going to be cheering louder for you. They're going to be behind you more in the clutch situations and it just continues to perpetuate from there.
How's the training been coming along?
Training camp has been going wonderful. I feel in better shape than my last training camp here, which is a big thing because I always push myself harder. Maybe it's because my body is getting used to the high altitude. More positive. Last time, before my last fight with Nate [Diaz] over here I got a cut, a laceration over my right eye and it was detrimental to me. I was scared, nervous, second-guessing: Would the fight get stopped? Now, it's going too good. I can fight the fight tomorrow.
Has the comfort level with Greg Jackson improved now that you're onto your second fight under him?

To tell you the truth, I've known Greg since I was 18-19. He's a great guy and that was one of the easiest things about coming here. And the people here in Albuquerque make you feel at home. It's hard being away from the wife and kids. It's not easy whatsoever. But they still bring the hometown feel. I don't feel too away from my loved ones because I feel I have a second home here. How is your time split between here in Albuquerque, N.M. and home in Victorville, Calif.?

You wanna know something that sucks? Everyone wants to talk about how fighters get ... they get all this cool stuff and they get to walk past lines and such, but what they negate to tell you is that we miss holidays. If Christmas is in training camp, guess what? You don't get Christmas. You can do something small but most of us are training on that day.

I'm here [at the gym] more than I am at my physical house. I'm gone from my house more than half a year because I'm also here to help my teammates when they have fights themselves.

So three fights a year, that's six months a year of just for me, and I don't know, probably another month's worth of coming here to help my friends because they come here to help me. That's like seven months out of the year I'm over here and not at home. Now that you're developing these new friendships with all these other fighters, do you find yourself more nervous when it's fight time for your teammates? You kind of have more people to think about.

Yeah, that's very much so. As far as before, I didn't really watch fighting. Fighting to me is something I'm good at and I enjoy it and it's cool. But everyday when you surround yourself with different aspect of fighting, sometimes you just want to sit back and not think about it, or not be involved. There were times when I wouldn't watch a UFC unless there was a reason to, unless there was someone like: "Oh I got watch this guy, he's going to post a threat in the future." Now it's become more of a, "Oh shoot, my teammate's fighting. I gotta support him. I gotta watch him." In a little way, you're right there. You find yourself more involved, even more so because of the teammates.

But honestly, it's a lot more ups than downs. And being with a team like Jackson's. They have the highest percentage in MMA for any fight team. So there's a lot more ups than downs, and even if there's a million more downs than there were ups, those one or two ups will make up for it. Just like marriage, you know, you might fight a lot with your chick, but it's the one or two times that's just amazing that you cannot replicate with another person. That makes it all worth it.
This is the first opponent in years that isn't taller than you.

Wow. Yeah. That guy towered over me. I looked at the weigh-ins after the fight, and I'm like, "Oh man, I'm short – naahh, he's tall!" (Laughs.) And I'm going to look at this like a good fight. A very tough opponent in Spencer. Not one ounce of quit in that guy, but I'm upset at a few things. A lot of sites have him ranked higher than me. I feel that I need to show not [just] by winning but by beating him, and by that I mean finishing him and in an impressive fashion that these people that run these sites need to get off their couch and get in the gym, or need to be a little more involved than just looking at numbers. I think I'm going to have the opportunity to show my skills.
Spencer is going to want to keep this standing and he said he's been working extra hard on his takedown defense for you. What are some of the new things you've been working on to fight a guy like Spencer?

Closing the distance. Finishing from being inside. All the normal stuff that someone would tell you. Nothing super fancy except for the [training] partners that I get to do it against, which I'm not just doing it against regular people. I doing it against great athletes like Keith Jardine, freakin' Rashad Evans, Nate Marquardt, Cub Swanson, Aaron Riley, "Cowboy" Cerrone, Leonard Garcia, I could really just keep talking and talking about it.

What's your pick for the main event?

I'm sorry to say but I consider "Myself" to be the main event. (Laughs.) But honestly, that fight is going to be sooo good. I'm excited. I think Shogun can bring a lot to the table. I think fights are all styles and it's hard to say, "Dude you're going to be undefeated for a long time," but then again it's like the 155-pound division. You can also argue why is Shogun getting a title shot when there are all these other people? I think Shogun's got a chance more so just because of styles whereas probably most of the people in the division wouldn't. I really want to stay away from [making a prediction], but I'm definitely going to have to lean towards Machida, due to the fact that you gotta go with the champ.