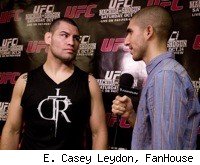 LOS ANGELES -- Cain Velasquez is only 6-0 in his MMA career, but considering all the buzz surrounding him, you would think he is on the verge of winning his 20th fight in a row. Such is a the life for a young, Latino heavyweight who appears to be on the fast track to the UFC heavyweight title.

At UFC 104 on Saturday night, Velasquez will face his toughest test yet: UFC newcomer Ben Rothwell. In the weeks leading up to the fight, Rothwell has repeatedly promised that he will expose Velasquez's inexperience, but the 27-year-old Velasquez appears very focused to prove that he is worthy of the hype. FanHouse spoke to Velasquez on Wednesday about Saturday's fight, and the video can be found below.