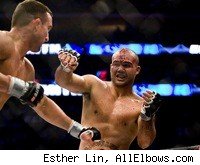 Little has been heard from Robbie Lawler since losing to Jake Shields at a Strikeforce event in June, but FanHouse has learned that the former EliteXC middleweight champion has been offered to return on Strirkeforce's December card. Lawler has verbally agreed to fight at the end of the year but no opponent has been finalized.

FanHouse has also learned that two opponents have been talked about to face Lawler: Ronaldo "Jacare" Souza and Nick Diaz.

Lawler's agent Monte Cox would not confirm nor deny Lawler's involvement on the card, but he did tell FanHouse last month that he wasn't interested in having Lawler fight "Jacare" in the near future.

"Jacare" recently signed with Strikeforce, but has yet to fight for the organization.

Diaz defeated Lawler via second-round knockout at UFC 47 in April 2004. He hasn't competed since defeating Scott Smith on the same June card in St. Louis, and was scheduled to fight Jay Hieron for the vacant welterweight title in August before pulling out after failing to show up to a pre-fight drug test administered by the California State Athletic Commission.

MMA Junkie recently reported that Strikeforce is looking to hold their December "Arena Series" show in their home base of San Jose, Calf., but no date or venue has been officially announced.