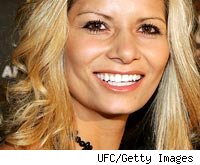 The latest chapter in the Kim Couture-Lisa Marie Varon feud took a bizarre turn on Sunday night when the two got into an impromptu shoving match at a TNA Wrestling pay-per-view.

Yes, both are insisting that their mini melee was not part of any kind of script.

"She turned around and came at me. I'm not just going to stand there and look dumb. I didn't know what she was going to do. So I kind of grabbed a hold of her, and it seems like as soon as we put our hands on each other security broke us up," Couture told FanHouse on Monday.

"I don't know if she was in character or if it was adrenaline. I don't know what it was."

According to both Couture and Varon, TNA had invited Couture to attend the pay-per-view. The plan was to have the women engage in a short staredown in the middle of Varon's match. But since Couture arrived approximately 20 minutes before Varon's match started, there wasn't much time to plan it out properly.

So when Varon fell close to where Couture was sitting ringside, Couture nudged her in the back, and Varon, a 10-year wrestling veteran, immediately thought a fan had gotten physical with her. Once she turned around and saw it was Couture, she lunged at her.

"I think she didn't know what to do, but I felt a shove behind me. At first I thought, 'Was that a fan or what?', because they're not supposed to touch us at all. I turned around, because that doesn't happen, and I just went after her. I was like, 'Are you kidding me?'," said Varon, known as "Tara" in TNA.

"I'm a very friendly person, but you just don't invade my space kind of thing. You just don't put your hands on me."

After the incident, both Couture and Varon were escorted backstage by security. Varon said she received a quick tongue-lashing and even thought she was going to get suspended or fined for her retaliation.

After she cooled off, Varon was told to re-enter the match immediately. The TNA broadcast crew made no mention of the incident while it happened or later in the show, and both Varon and Couture insist that nothing will be made of it on future TNA broadcasts.

"I'm not getting into pro wrestling. I'm not doing anything," Couture said laughing.

After Varon's match was over, Couture approached her backstage to ask what happened, but Varon quickly replied, "I don't want to talk to you. Go away." Couture obliged and left.

They cleared the air over the phone on Monday and both women claim there are no lingering hard feelings. Varon says the whole scene was "just a miscommunication."

She added that she didn't want fans to think her budding MMA career was part of some wrestling angle.

"I'm a little embarrassed. I'll be honest with you. I didn't want that to happen," she said.

Varon has recently been in contact with Strikeforce matchmaker Rich Chou about fighting for them in the future and has also discussed sponsorship opportunities with TapouT. She is planning on attending Couture's fight against Kerry Vera on Nov. 20 in Kansas City, Mo., and while she still hopes to fight Couture in the future, Varon has set no timetable for her MMA debut.

Meanwhile, Couture, who says she is only focusing on Vera right now, is open to fighting the MMA rookie.

"I think it's funny that she hasn't even had an amateur fight yet, and she wants to call me out for her first fight. Normally, I'm pretty quiet, but I spoke up and said a few things over the past month," she said.

"If she's crazy enough to get in there with me for her first fight, then great."

TNA's next broadcast on Spike TV airs on Thursday, so viewers will learn then if anything will made of the episode. There is currently no mention of Couture on TNA's Web site.

Below is the only footage currently available of the incident: