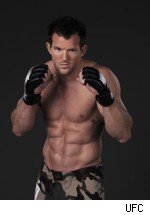 Bader, one of the many wrestler-turned-MMA fighters out of the Arizona Combat Sports camp in Tempe, recently spoke with FanHouse as he looks to improve his undefeated MMA and UFC records to 11-0 and 3-0, respectively, on Nov. 24 at the Staples Center in Los Angeles, Calif.

Ray Hui: This is your third straight UFC opponent whose specialty is grappling, but Schafer is probably the most well-rounded.

Ryan Bader: Eliot [Marshall] was pretty well-rounded also. He has some decent standup so I'd say Eliot was probably the most well-rounded as far as striking and jiu-jitsu, but what Eric Schafer brings to the table is experience, being in the big shows with guys like [Michael] Bisping, [Stephan] Bonnar and Houston Alexander and what not. He's been around the game so he definitely has that advantage. What do you think is the key to victory against Schafer?

Controlling the fight and keeping it where I want it to be. I don't want to be down there on the ground doing jiu-jitsu with him. If I'm down there either stay away from it or bring it up to my feet. He's dangerous on the ground, so I got to watch that.
Fighters tend to enjoy playing the underdog role. What are your thoughts on being the strong favorite coming in against Schafer?

It doesn't matter either way. I've trained for this awhile now. I'm used to playing the underdog role and the favorite. I was the underdog in the Vinny fight. Nobody thought I had a chance. I liked playing that but at the same time with my wrestling background and all that I've been the favorite quite a few times. It really doesn't matter. I trained for this fight to win this fight so that stuff doesn't get to me.Both of you are coming off injuries and there really aren't tune-up opportunities fighting in the UFC. What have you learned from experience on how to deal with ring rust?

I don't think we get much ring rust cause the way we go practice and how hard we work and how hard we spar. I go with guys like Aaron Simpson, CB Dollaway, Carlos Condit ... Those type of guys. When I get into the Octagon I look at it as another sparring session kind of. Ring rust doesn't affect me too much. I'm used to having those six months since after The Ultimate Fighter, there was another six months before we fought on the finale and then I had a couple of fights later. It doesn't really bother me that much; it just allows me to acquire more tools.

Condit recently left. What's the atmosphere like when a top fighter leaves your camp?

He has to do what he has to do as far as he having a kid and his wife wanting to go back to Albuquerque. It's not really much of a difference. He's a great guy and a great addition to have in the room but we still have our guys that we work with on a daily basis, so nothing too different. We don't let that kind of stuff affect us. We still have our training partners that we started out with when we were [first] successful.
Like CB and Aaron Simpson, you guys had a background with Arizona State University before you went into MMA. What does it mean to you to maintain that connection with ASU?

We still go back in there and help out the wrestling team once in a while. There's days when I don't want to hit pads or the non-sparring days sometimes I'll go in there just to get a good workout if anything cause wrestling keeps you in good shape.

We do what we can for the ASU as far as the community and what not. We're going to do a grappling/MMA camp. Whatever we can do as far I them using us or us helping them out. We jump at that and try to help out as much as possible.
As Nogueira's first pick on the show, do you still keep in touch with him? And what did you think of his win over Randy Couture?

I try to keep in touch with him as much as possible. He's out in LA every once in awhile. Maybe after this fight I'll train around with him [in Miami], I know Efrain [Escudero] is going out there, but I thought that fight was amazing. Watching those two guys go at it. That's the fight that people have wanted to see for a long time, so to see it actually happen ... It was a phenomenal fight.
What's your pick for the Lyoto Machida vs. Mauricio "Shogun" Rua fight?

Machida always has his elusiveness and whatnot and Shogun has the tools to beat him. If Shogun shows up like he was like when he was in PRIDE. So it's going to be a tough one, but I think Machida is going to get a decision out of it.