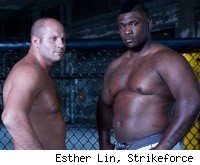 Despite the fact that the Brett Rogers vs. Fedor Emelianenko fight will not be airing on Showtime, the premium cable network obviously still has a lot invested in the heavyweight bout, and it is putting it's promotional muscle behind it.

On this week's edition of The MMA Hour, which will be presented later this week at MMA FanHouse, Rogers mentioned that an episode of Showtime's new Fight Camp 360 series is being produced about the fight, and it will air around a week before the CBS telecast on Nov. 7. When contacted by FanHouse, Showtime officials would only say that an announcement regarding the show's air date would be coming soon.

After some questioned the promotion -- or lack thereof -- for this fight last month, including FanHouse's Michael David Smith, it seems as though CBS and Showtime are picking up the pace. CBS has begun airing commercials for the fight during football games and they recently released a one-minute promo hyping Emelianenko's debut on the network.

Sure, more can be done. For example, it would be nice to learn more about Rogers, Strikeforce and the other fights on the card, but hopefully that will happen in the next few weeks.

In the meantime, the news that a special preview show will air on Showtime has to be seen as a positive. The first episode of Fight Camp 360, which previewed the first stage of the super middleweight World Boxing Classic, was hailed by many boxing insiders as a solid first effort. And even though this fight isn't airing on Showtime, it will certainly play an important role in the growth of Strikeforce, which airs most of its events on the network.

HBO seemingly revolutionized the way fights are promoted by introducing the combat sports world to it's critically acclaimed 24/7 series two years ago, and the UFC followed suit in January when they produced a three-part Primetime show for UFC 94. So it will be interesting to see how Showtime uses that formula to promote it's upcoming fights, and hopefully future MMA events on the network will receive a similar promotional push.

In case you aren't familiar with Fight Camp 360, you can watch the premiere episode below.