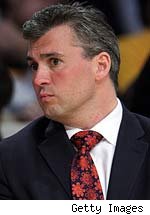 McMahon, who helped launch the company into new international markets and headed its publications division, announced the move via a company press release.

While the direction of his future business career is uncertain, the world of mixed martial arts could be a possible landing spot.

A longtime fan of the sport, McMahon has attended several UFC events in person. In the early part of the decade, the WWE had at least a passing interest in buying the then-struggling UFC. In more recent years, pushed by Shane McMahon, the WWE had preliminary internal talks about getting involved in MMA, though no projects ever came to fruition.

In 2007, the UFC surpassed the WWE in pay-per-view revenue and has widened its lead ever since.

Saying he had previously "never even considered a future outside the walls of WWE," the 39-year-old McMahon made no specific mention of any plans once he leaves the company, simply saying, "I feel this is the opportune time in my career to pursue outside ventures."

On a story on the company's website to announce the move, Vince McMahon said, "Even though I am personally saddened by Shane's decision to leave the company, I am proud of the enormous contributions he has made. He will unquestionably bring passion, commitment and extensive business experience to any endeavor he pursues."

Shane McMahon's resignation comes exactly one month after his mother Linda also stepped down from the company to pursue a run for the Senate in Connecticut.