Dan Henderson's Camp Says No Deal With Strikeforce Is Imminent 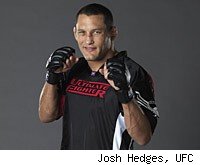 Dan Henderson is currently an MMA free agent considering all his options, but his camp says he is not close to signing a deal with Strikeforce or any other promotion after his negotiations with the UFC stalled.

Responding to a Yahoo Sports report that Henderson is "on the verge of signing" with Strikeforce, Henderson's friend and business partner Aaron Crecy said that wasn't the case, and that no signing with anyone is imminent.

"We had a brief get-to-know-you session with (Strikeforce) and met them for coffee, but to say he's close to signing would be a gross misrepresentation," Crecy said.

When reached by FanHouse, Strikeforce CEO Scott Coker said, "We've had dialogue with Dan but that's all I'd like to say."

Crecy said that Henderson wants to take his time and make sure he's making the right decision before he signs with anyone. He said Henderson has a hunting trip planned and would not make any decisions about his future before that. Henderson plans to attend the November 7 Strikeforce show in the Chicago area, but only as a guest who wants to see how the organization is run, and not as the promotion's newest fighter.

Henderson, who's coming off a knockout win over Michael Bisping at UFC 100, is widely regarded as one of the best fighters in the world at both 185 pounds and 205 pounds, and he held the Pride championships in both of those weight classes. Strikeforce doesn't have nearly the roster depth that the UFC has, but it could put him in the cage with several good opponents in either of those weight classes: Jake Shields, Jason Mayhem Miller, Cung Le, Nick Diaz, Robbie Lawler, Gegard Mousasi and Sokoudjou would all be potential opponents for Henderson.

Still, the fight Henderson really wants is a rematch with UFC middleweight champion Anderson Silva, and that's why Crecy stressed that Henderson is in no way closing the door on getting back into the Octagon.

"Until something is signed," Crecy said. "Nothing is ever over."