Woodley vs. Bears, Kaufman vs. Hashi Added to Strikeforce Challengers 5 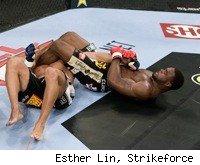 Strikeforce has put the finishing touches on the televised portion of their Nov. 20 Challengers show, and it features a solid mix of up-and-coming stars.

Meanwhile, Strikeforce's top 135-pound women's fighter, Sarah Kaufman (10-0), has agreed to meet another Strikeforce rookie, Japanese fighter Takayo Hashi (12-1). Hashi avenged the only loss on her resume in 2007 -- a 2005 submission to current Strikeforce fighter Hitomi Akano -- when she defeated Akano via unanimous decision in 2007.

The undefeated Kaufman is 2-0 in her Strikeforce career, already defeating Miesha Tate and Shayna Baszler earlier this year.

Strikeforce director of communications Mike Afromowitz confirmed the bouts with FanHouse on Thursday.

In other 135-pound female action, Strikeforce has officially confirmed the Kim Couture (1-1) vs. Kerry Vera (1-0) bout. Both fighters are relatively new to the MMA game, but this fight is intriguing because six days before the bout, Vera's husband, Brandon Vera, will meet Couture's ex-husband, Randy Couture, at UFC 105 in Manchester, England.

"I think it was a brilliant idea on Strikeforce's part," Couture recently told FanHouse.

"I didn't really think about that, because I don't think at the time I knew that Randy was fighting Brandon, but I thought it was ironic when I found out. It's a good story; it's a sexy story."

Rafael "Feijao" Cavalcante (7-2), who was tapped to fight then-light heavyweight champion Renato "Babalu" Sobral in June before Sobral pulled out of the fight due to family reasons, will return to action against Aaron Rosa. "Feijao" suffered the second loss of his MMA career when late-replacement Mike Kyle defeated him via second-round TKO on that same June card.

Rosa, a prodigy of UFC light heavyweight star Tito Ortiz, will look to build on his first Strikeforce win against Anthony Ruiz in May. The 12-2 fighter holds an important place in MMA history because he was originally scheduled to face Seth Petruzelli on Oct. 4, 2008, on EliteXC's third CBS show. But when Ken Shamrock injured himself prior to his main event bout against Kimbo Slice, Petruzelli stepped in on very short notice, leaving Rosa without an opponent, and Petruzelli would go on to defeat Slice in just 14 seconds.

Fighters.com first reported the possibility of the Cavalcante-Rosa bout earlier this week.

The event will air on Showtime from the Memorial Hall in Kansas City, Mo. It will mark the organization's third event in a two-week stretch.