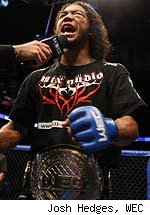 On this week's edition of The MMA Hour, we opened the show with the new WEC interim lightweight champion, Benson Henderson. "Smooth" discussed his epic five-round title victory over Donald Cerrone on Saturday night, his health status and when he expects to fight current lightweight champion Jamie Varner.

Later in the show, we talked to WEC lightweight fighter Alex Karalexis about training with Jared Allen of the Vikings, his upcoming fight against Kamal Shalorus at WEC 44 and why he would rather fight in the WEC than the UFC. Watch or listen to The MMA Hour below.