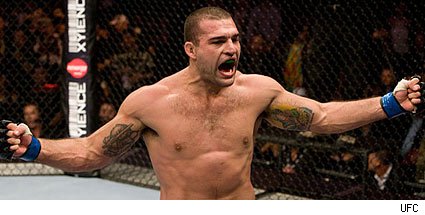 It's been a long time since Mauricio "Shogun" Rua has walked into a fight as the underdog, with the odds stacked against him and the fans doubting his ability to win, but that's exactly what he'll face on Oct. 24 when he steps into the octagon at UFC 104 and stares across the cage at unbeaten champion Lyoto Machida.

For Rua, though, the strange phenomenon has been both liberating and inspirational.

"I try during preparation to focus on everything I can as a source of motivation to prepare harder and train harder," he said through an intrepreter on a conference call. "This is the case here. I think he is the favorite and rightfully so. He's the champion. I give him props and I think it's only right he's the favorite."

Rua (18-3) was awarded the title opportunity after a first-round TKO over Chuck Liddell back in April. With the six-month layoff between fights, Rua has been very active in his preparation, saying he's been training for four months straight with his longtime camp in Curitibia, Brazil, in an attempt to prepare to solve Machida's riddle. Most fighters opt for a two-month camp, so the extended prep time illustrates Rua's drive and determination to reach the top.

The rise and fall (and rise) of Rua illustrates the wildly fluid nature of MMA. It wasn't too long ago when Rua was considered by many to be a lock to win the UFC belt. A former PRIDE Grand Prix champ, he debuted in the octagon to major expectations in Sept. 2007 and was promptly stunned by Forrest Griffin in a third-round submission loss.

Knee surgery followed, and when he returned 16 months later against Mark Coleman, he looked somewhat lackluster in a third-round TKO victory.

With that performance, the voices of the doubters rose, as many began openly wondering if the 27-year-old would ever recapture the form that made him one of the most feared fighters on the planet.

His next time out, however, he was much sharper. His sound defeat of Liddell signaled to some he was completely back. But Rua? He never had any doubts that he'd rebound to top form.

"Much on the contrary I never worried about myself," he said. "I believe in my potential and what I can do. After the fight with Coleman, I realized my mistakes and that I could do better. It got me on the focus track. I trained harder, prepared better and took care of what problems presented themselves. I only train, eat and sleep and do nothing else."

The matchup features two Brazilians who are well acquainted with each other personally and professionally. Rua and Machida have known each other for years and for a short time trained together. Not surprisingly, they share a deep mutual respect for each other that both men are quick to voice.

But both also note that won't deter them from any attempts to finish the fight.

"We've know each other for a good time already. We trained a bit a while ago at Chute Box," Rua said. "I really admire Lyoto inside and out of the cage. He's a great fighter and person. I don't have anyting against him, but I knew sooner or later I'd have to end up in this situation fighting a Brazilian and someone I'd trained with. It's only natural since we're both doing good. He's a great guy and great fighter, but this is our job. We're reaching for the same goal, and we'll make it a great fight for fans."

Fifteen opponents have tried and failed to solve Machida's complex karate-based approach, and most handicappers give Rua minimal odds of becoming the one to crack the code. But even Machida himself says, "I think no one is unbeatable. Everybody could be beaten."

Perhaps the oddsmakers are right about this fight. But there's also another possibility, that those who have forgetten what Rua once was will be reminded on Oct. 24.

"Every fight I fight, my biggest goal and dream is to win the fight. I try to take each one at a time," he said. "But surely this is special for the belt, but also for the UFC belt, in the biggest show in world and the toughest weight class in the world. Ever since I came to the UFC, my dream is to be the champion of the show. I take each fight as a step toward the goal. Now, the time has come to fulfill the dream. This means the world to me and it's about time to rise to the occasion and achieve my dream."