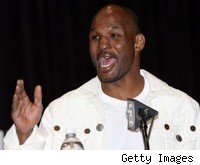 Stop me if you've heard this one before: a legendary figure from the boxing world has decided to take a couple of shots at MMA. This time its Bernard Hopkins who has decided to join the MMA bashing party.


Hopkins, who will be making his long-awaited return to the ring in December against Enrique Ornelas, has spoken pretty favorably about MMA in the past, so I'm not sure why he feels the need to put the sport down now. My only guess would be -- and this comes to mind any time someone from the boxing world decides to trash MMA -- is that, for one reason or another, he feels threatened by the sport. Remember, Hopkins now works as a promoter for Golden Boy, so much like the Arums of the world, he has a vested in the business of combat sports.

The boxing community can boast all they want about Floyd Mayweather's recent pay-per-view out-drawing UFC 103, but the fact of the matter is that boxing only puts out two or three mega-fights a year on pay-per-view, while the UFC produces closer to seven or eight major shows. The real shocker would have been if the rather weak UFC 103 card would have sold more pay-per-views than Mayweather's return to boxing, not vice versa.

But instead of spending his time insulting MMA and its fans, maybe Hopkins should ask himself why he is fighting a relatively unknown fighter with a 29-5 record before facing 40-year-old Roy Jones Jr. in a rematch few in the boxing world seem to care about. For someone who likes to comment on what constitutes as entertainment, he doesn't appear to know how to produce it any more.