Strikeforce Wants to Unify Titles With Dream, but What Will That Mean? 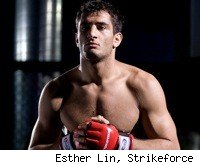 Strikeforce CEO Scott Coker said on a conference call Wednesday that he plans to work with the Japanese Dream promotion to put on fights between Strikeforce champions and Dream champions. It sounds good in theory: In combat sports, title unification bouts are always a good thing. But there's just one problem: There's not a single weight class in which Strikeforce and Dream both have one champion who can fight the other champion.

Take a look at the current champions in Strikeforce and Dream:

There is the possibility of a title unification bout happening at lightweight, although that couldn't happen any time soon. First Dream lightweight champ Shinya Aoki will need to defend his title against Tatsuya Kawajiri on New Year's Eve, and Strikeforce will need to unify its own lightweight belt by matching champion Josh Thomson with interim champion Gilbert Melendez. I'd love to see the Aoki-Kawajiri winner fight the Melendez-Thomson winner (especially if it means American fans get to see Aoki in the flesh), but I'm not holding my breath.

This isn't intended as a knock on either Strikeforce or Dream, both of which are good promotions that put on good shows. And it certainly isn't a knock on the worthy goal of matching champions against each other. But before either promotion starts talking about championship unification bouts, they both ought to make sure they have champions to fight in them.