Rolles Gracie Jr. Eyes Fight in US Next 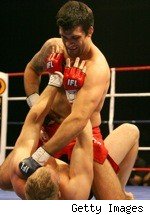 At 6-foot-4 and 240 pounds, Rolles Gracie Jr. is the largest member of the Gracie family to ever compete in MMA. Thus far, the 31-year-old has recorded three victories in his first three professional fights, including a recent win over Peter Graham at Art of War 14 in China last month.

But Gracie is now a free agent, and after making his MMA debut Stateside in September 2007, he's looking to fight once again in the U.S. On a recent edition of The MMA Hour, Gracie said he has been in dialogue with all the major promotions, but is in no hurry to sign a long-term deal.

"We've already been flirting with them for a minute. So let's see what happens. Right now, I'm at the point of my career where I'm not in a rush. I'm not the kind of fighter that wants to fight 10 times in a year," he said.

"I want to fight three, four times the most in a year, and I know it's just a matter of time for me to be in a big organization here."

Gracie, a silver medalist in the over 99 kg division at the 2007 Abu Dhabi Combat Club World Championship, believes he will be fighting full-time in America "early next year." He seems open to competing for any organization, but doesn't hide the fact that he would love to someday fight in the UFC.

"I want to fight wherever they treat me good. That's my priority," he said.

Prior to his recent Art of War bout, Gracie was offered a fight against fellow MMA newcomer, Bobby Lashley, for later this year. However, he said that both sides couldn't come to a financial agreement.

"I was really looking forward to this fight," he said.

"I still see Bobby Lashley as a very dangerous opponent. A guy that big, that fast with the wrestling background, he's got to be. You can not underestimate a guy like that."

Gracie, who splits his training time with the Renzo Gracie Jiu-Jitsu Academy in Holmdel, N.J. and Greg Jackson's Mixed Martial Arts in Albuquerque, N.M., said he would love to someday fight Lashley, but isn't in discussions anymore to face the former WWE star soon.

He's sort of gentle giant who does not like to talk trash about anyone but did not hold back when discussing the feud between Frank Shamrock and his uncle, Renzo Gracie.

"I want to see Frank Shamrock get his ass kicked again," he said.

"I don't like disrespectful people. I don't like the crap that he said. I don't admire the guy. Not even a tiny bit."

The Gracie-Shamrock feud, which ended inconsluviely in February 2007 when Gracie defeated "The Legend" via disqualification on the first EliteXC card, won't be settled in the future, but Gracie confirmed that his uncle is training hard for an upcoming fight. He stopped short at saying when or where it would take place, though.

"He's training already. He lost some weight, getting leaner. He's excited, man, and like he said, he's going to fight until he's crapping in his pants."

Check out the full Gracie interview on The MMA Hour here.