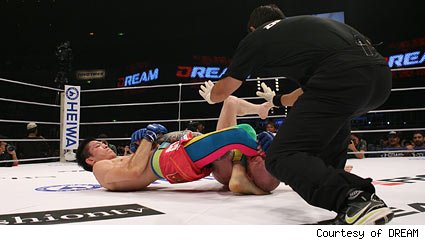 Tanikawa said the event will be similar to last year's in that there will be a mixture of K-1 kickboxing and DREAM mixed martial arts bouts to fill out an 18-fight lineup.

The retirement fight of two-time K-1 World MAX champion Masato, one of the organization's most dominant and popular fighters, will will likely serve as the main event for the card airing live on Japan's TBS.

The expected DREAM bouts so far are Shinya Aoki defending his DREAM lightweight belt against Tatsuya Kawajiri and the finals of the Super Hulk tournament between Ikuhisa Minowa and Rameau Thierry Sokoudjou, though the Aoki-Kawajiri bout is less certain, as Aoki, after his title win at DREAM.11, wouldn't comment on a Kawajiri fight.

The card will also feature semifinals and finals of this year's K-1 Koshien tournament, a 137-pound kickboxing tournament for high schoolers.