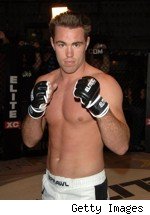 When mixed martial arts returns to network television on November 7, the undisputed star of the show will be Fedor Emelianenko, the sport's heavyweight champion.

But Fedor doesn't speak English and isn't well known in the United States, and that means promoting the CBS show will fall in large part on other fighters on the card. Jake Shields and Jason "Mayhem" Miller, who will meet for the Strikeforce middleweight title, say they embrace that opportunity.

"Strikeforce is the right promoter to bring MMA to the mainstream," said Shields, who fought twice on CBS last year under the EliteXC banner. "It's really important to us to make this successful. I want to do my part to promote this."
Miller, whose role as the host of MTV's Bully Beatdown makes him one of America's most famous non-UFC MMA fighters, said he expects to take on a lot of promotional duties himself.

"Stick a microphone in my face and I'll riff on it," Miller said. "I want everyone to watch this fight, and if you miss it you're missing not just a great fight with me and Jake, but also the No. 1 heavyweight in the world taking on the undefeated Brett Rogers. If MMA fans don't know about this fight it's not my fault, because I'm Twittering, MySpacing and Facebooking. I'm out there. I might as well be spray painting about it on walls."