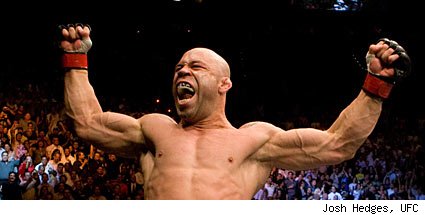 Yoshihiro Akiyama said at a UFC press conference Tuesday in Japan that he will fight Wanderlei Silva inside the Octagon some time in early 2010, possibly in the main event of UFC 111 in Sydney, Australia.

Tony Loiseleur of Sherdog reported that Akiyama confirmed he'll fight Silva at 185 pounds, and although Akiyama said he would personally prefer to do the fight at UFC 110 in Las Vegas, my own opinion is that UFC 111 would make a lot more sense. Akiyama-Silva is tailor made to be the main event of an overseas show, and considering that Akiyama and Silva are two of the most popular fighters among MMA fans in Japan -- and that there's just a one-hour time difference between Sydney and Tokyo -- the UFC must be thinking that the Australian show will be a good one to draw in Japanese TV viewers.

UFC 111 hasn't been officially announced, but it's expected to take place in Sydney in late February. Predictably, the UFC's impending arrival has led to inaccurate, over-the-top news coverage from those who are sure MMA signals the decline of civilization. But there are plenty of people in Australia who understand MMA and are excited about seeing the UFC, and Silva vs. Akiyama would be a great fight for them to see.