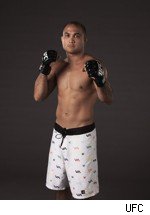 The UFC formally announced Tuesday the first three bouts for UFC 107 on Dec. 12 at the FedExForum in Memphis: BJ Penn vs. Diego Sanchez, Frank Mir vs. Cheick Kongo and Thiago Alves vs. Paulo Thiago.

The promotion had booked the show with the location in mind to coincide with Memphis-born light heavyweight Quinton "Rampage" Jackson's expected fight against Rashad Evans as the culmination of their coaching feud on The Ultimate Fighter 10 series. However, Jackson's film pursuits will stall the grudge match and Penn vs. Sanchez was moved from UFC 105 to UFC 107 to have a championship bout round out the final UFC event of 2009.

Penn (14-5-1), who will make his third defense of the lightweight belt, is coming off a rear-naked choke submission win over Kenny Florian at UFC 101 in August. He'll defend against a fighter whose been a lightweight for less than a year. Sanchez (23-2)'s wins over Joe Stevenson and Clay Guida -- both Fight of the Nights -- have apparently been enough to warrant a shot at the title.

Mir (12-4)'s blunt responses towards Antonio Rodrigo Nogueira's remarks suggesting that a staph infection and an injury contributed to his loss to Mir at UFC 92 last year, have fueled interest in a rematch, but Mir will indeed take on Kongo (24-5-1) in a scrap between two heavyweights looking to avoid back-to-back losses and further descent down the rankings. Mir fell short of the UFC heavyweight title in July when he was bloodied up from ground and pound strikes by champion Brock Lesnar and Kongo's title hopes slipped away in a loss at UFC 99 in June against Cain Velasquez, who after the win is likely one fight (Ben Rothwell) away from a title shot.

Adding to probably the toughest workload ever for a recent UFC newcomer, Thiago (11-1) will face recent title challenger Alves (22-5). It was only February when Thiago upsetted Josh Koscheck, but while the win saved him his job, he's been assigned Jon Fitch and now Alves to close out his first year as a UFC welterweight.